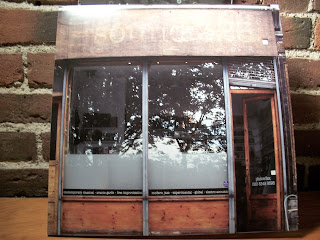 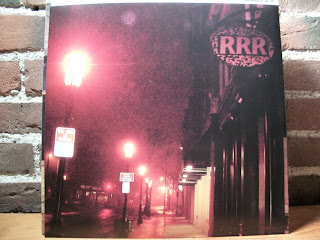 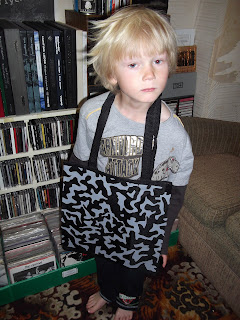 One of the up-sides to having a week off work due to illness (it is nerve damage related, send no flowers) is being able to catch up on some book reading and listen to music all day. (and search for all the Harry Batt clips on YouTube). The down-side is having to take painkillers and avoid alcohol, but still....a week off.
A couple of days back the postman brought the LP "Record Store Record" on RRRecords. The record is a recording from five independent record shops in America, London and Finland. I bought it not knowing what to expect, the concept appealed. I thought, but have since been proved mistaken by Ron Lessard, it was something to do with International Record Store Day which took place last April with recordings from the five shops being done on that particular day. But no - as Colin Newman once said.
The first side starts with the sound of Second Layer Records in London. Highgate, North London, and is the only shop on the record I have been to. 2008 - I saw Testicle Hazard there and bought an Esplendor Geometrico Box Set. Time well spent. Proprietor Pete's voice is predominant on this track, as is his tape gun and bubblewrap. It sounds like Pete has mic'd up his tape gun and recorded himself packing vinyl. Interesting, it had me thinking of what Haters would sound like "unplugged". From this track we also learn that Pete only stocks one Whitehouse album and has a record that sounds like Siouxsie Sue "doing" Deep House. Then we spend a couple of minutes in Dominic Furnow's Hospital Productions store in New York with some guy talking as if the last place he visited was the crackhouse on the corner. Next on is Wierdo Records from Cambridge Mass. USA. More talk about vinyl and noise with a baby screaming in the shop. Side two is Mikko Aspa's side. First in his shop "Sarvilevyt" in Lahti, Finland. For fifteen minutes or so a group of guys talk noise in Finnish. There's serious talk and laughter and some guy gets sent out for "Cherry Coca-Cola", but I don't understand a bloody word of it. Would love to know what "Cock-Schtumpy" means though. Mikko turns up on the second track inside Ron Lessard's RRRecord Store. Here Mikko plays the tape gun like a musical instrument whilst packing vinyl. Loose talk is heard in the background.
Like I mentioned before, the concept appealed and I am not disappointed. It is a document piece more than a novelty one and also proves the record shop to be a 21st century village pump. A meeting place for anal retentives and autistics - like myself. I think the album itself is only available from the shops on the record, but I could be wrong. It is limited to 500 and comes with a tote bag featuring the RRR Squiggle Design (done by some folk from Cold Cave). It's full colour gatefold sleeve too! Yeh, I love gatefold sleeves. Second Layer Records are on the front making it look like (when browsing) it could be an album by John Cougar Mellancamp or Carl Michael Von Hausswolff.
Recommended.