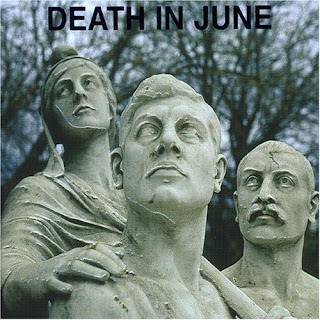 Have just spent a pleasant while listening to "Burial" by Death In June. I managed to pick this CD (the 2006 re-issue from Leprosy Discs/Tesco Distro) up a few days ago at Rooster Records in Exeter. I also managed to pick up some Current 93 on CD too - success. I was saddened to find out that Exeter's other (independent) record shop Martian Records had shut down at the beginning of the month. Martian Records dealt in Rock, Metal, and Black Metal inparticular so my visits there were rare (twice in ten years), but it had a very small secondhand section and it is always sad to see a shop fold and leaves Rooster Records (on Fore Street) as Exeters last secondhand vinyl shop - for the moment. It is to be noted that Fopp recently opened in Exeter.

Back to "Burial". This is my first Death In June purchase since 1985. I used to love the first few releases, the singles "State Laughter" and "Heaven Street" and the LP "Nada". But now (of course) the vinyl costs funny money, so it was good to see this CD for £7. Now (of course) you are made to feel like a criminal in some quarters for liking Death In June, but back in 1981 they were the band that formed out of Crisis and Crisis were one of the greatest punk bands ever. "Burial" includes the track "Fields", this track sounds like an old Crisis number with its' angular guitar and thumping rhythm. Early Death In June had a very "post-punk" sound similar to that of stuff released by Factory Records and 4AD. "Burial" also contains my favourite DIJ song, "Black Radio". This song was originally released on the compilation album "The Angels Are Coming". Released as a double C60 cassette on the Scottish Pleasantly Surprised label. Also on this compilation were The Alarm, Dislocation Dance, Stockholm Monsters, VeeVV and Test Department amongst others - eclectic, but then "post punk" was I supposed before it all got compartmentalised. Here "Black Radio" lasts a magnificent seven minutes. The second half of the CD is Death In June live at the Clarendon Hotel in London in October 1983. The recording is surprisingly quite murky but acts as a fine document of what Death In June sounded like live. Murky, slightly chaotic and too much repeat echo on the microphones. It's great to hear guitars being tuned between songs - that takes me back! The album ends on a mammoth version of "Heaven Street" with four or five minutes of tape rumblings at the end. Good stuff.
I did used to own everything by Death In June up until they released the "Born Again" 12", then they went average.
I wholly recommend this album especially if, like me, you're a fan of Crisis.
Posted by Steve at 16:08