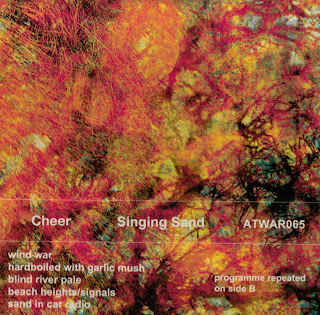 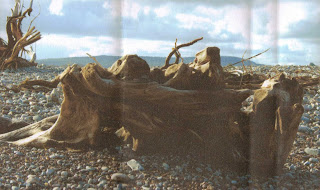 Just spent a pleasant while listening to "Singing Sand" the 2009 cassette release from Cheer. I must admit now that I have stalled in the past from getting stuff on the "At War With False Noise" label because their logo "put me off"! For ages I thought it was a Scottish Doom Metal label. It wasn't until I got some Nackt Insecten releases that I realised I was wrong. Still, I know better now. Cheer is the solo project of Glasgow based (but Orkney Isle born .... research) musician / artist Al Cheer. As well as At War With False Noise Al has released on labels such a s Benbecula, Lefthand Pressings and Distance Recordings. "Singing Sand" is my first exposure to the sound of Cheer. (Thanks Tom)!
"Singing Sand" consists of five ambient pieces. If I entered a room and heard this tape playing and was told it was a 1973 concept album by the keyboard player from Aphrodite's Child and the guitarist from Glass Hammer I would probably have believed them!
Light polyphonic keyboard layered drones through a delay, accompanied by phased and delayed guitar notes. Beautiful for a summer's day (or at least it was when I was playing it last Friday...now it is Sunday, I am still playing it but it has been pissing down all day - Scottish weather). It has a Durutti Column come Bill Nelson feel about it all. Very good and highly listenable. Side 2 is the same as Side 1 - saves rewinding I suppose.
I have yet to hear a bad release on At War With False Noise, give them a browse; atwarwithfalsenoise.com or explore the works of Al Cheer through; mecheer.com