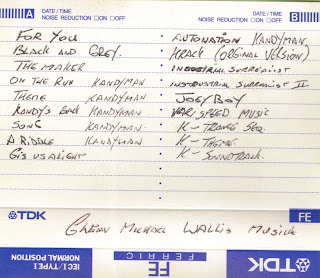 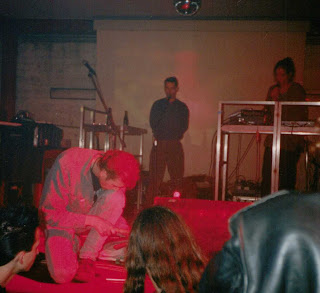 A treasured tape, one which plays beautifully and holds great memory. "Musick" by Glenn Michael Wallis is such a tape.
1998 and I get to play my first ever gig on foreign soil. Belgian soil, the small town of Sint-Niklaas. How we got the gig, how we played the gig...that is another story, but for three nights and four days I was in Sint-Niklaas, a small Belgian town north of Antwerpen. Eriek Van Havere was the organiser of the gig and our host for : The Eleventh Festival For Independent Music & Arts. (Eriek is one of the founders of the great label KK Records and even greater EE Tapes).
Eriek was also playing host to Glenn Micheal Wallis who was performing with Dutch collective Amy Love as well as performing a short "impromptu + unadvertised" solo set as Konstruktivist.
It was a bizarre situation to be in. To be playing my first ever "away game" and spending the weekend with the mighty Glenn, the former Throbbing Gristle "roadie", the guy behind Konstruktivists and N.K.V.D. Early '80's experimental synth, Third Mind Records, Conspiracy International.. the list of great works is ..... all there to see.
And Glenn can talk and talk he did. Fascinating stories of being on the road with Whitehouse and Vagina Dentata Organ, being in Sheffield with DVA. (This one always fascinated me as I thought that the N.K.V.D. project had some DVA input and at the end of the Clock DVA (bootleg) tape "The Alternative Soundtrack To The Texas Chainsaw Massacre" there are some Konstruktivists "demos". Interesting stuff). There was this bizarre moment when I was sat at a bar of a Country & Western themed pub on a Sunday Morning in a sleepy mid-Belgian town hungover but drinking listening to Glenn talk about TG and his thoughts on the (then) upcoming "Wreckers Of Civilisation" book, and Charlie Rich played on.....beautiful.
On returning I contacted Glenn. There was talk of a Dieter Muh / Konstruktivists gig in London, but nothing came of it, then I got this tape through the post with a thank you for a time well spent in Sint-Niklaas. I am uncertain to whether or not the tape contains released or rare material or what became of Glenn's "Kandyman" project but it is a treasured tape and one that gets played alot at Hartop Towers.
Side A is nearly all "vocal" tracks. "For You" reminds me of the great Phones B. Sportsman single (on Rather Records) "I Really Love You", faux Elvis croon sounding like The Grumbleweeds. The Kandyman material is raw synth pop. Side B is all instrumentals varying from "Kraut-Synth" style meanderings to violent noise. Easy listening to these ears. Unfortunately I have lost the letters that Glenn wrote, and the one that came with this tape. Too many moves.

It was good to know that Glenn recently performed as Konstruktivists again in Austria with Nocturnal Emissions, after the excellent "Flowmotion Years" double LP release on Vinyl-On-Demand it'll be nice to see Glenn get the recognition he deserves.