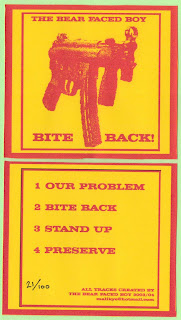 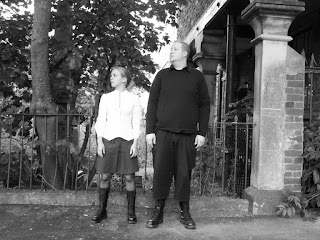 Just spent a pleasant while listening to "Bite Back!" by Bear Faced Boy, a 2005 3" CDr release by Bristol based Abrasive Productions. The sound is pure European Power Electronics. Sometimes I like to listen to pure European Power Electronics and the likes of STROM e.c. , Genocide Organ, Soldnergeist et al. "Bite Back!" by Bear Faced Boy fits the billing perfectly.
This is a 4-Track 3" CDr released in 2005. A few years earlier Con-Dom released the seminal album "Colour Of A Man's Skin" on Tesco Org./Control Domination and this EP pays homage to that album. The strongest track "Our Problem" kicks off the journey with the Adhan and crumbles into a fine piece of throbbing crunchy electronics. Teutonic and Merzbowesque. The Eastern feel continues into track 2, the title track "Bite Back!", surprisingly the least effective track on the EP. "Stand Up" follows with an opening sample from an old Ku Klux Klan rally - I think the American group Consolidated used the same sample on their LP "The Myth Of Rock", so no accusations of Right Wing propaganda, please.
I once saw Consolidated live at the Boardwalk in Manchester (I think 1989 with Meat Beat Manifesto) and half way through their set they stopped and started a discussion group / Q&A meeting, first time I'd ever seen that. Us smug stoned vegan types dressed in black combat drill just stood at the bar tutting!
Anyway. "Stand Up" has a slow rhythmic noise loop building and decaying, before the final piece "Preserve"; a torturous sound of being trapped in a wind tunnel with violent electronics hovering all around like vultures waiting to pick at the carcass. Lovely stuff.
There's also a CDr by Bear Faced Boy called "The Aim Of Religion" and next time I fancy listening to some damn fine pure European Power Electronics (PEPE), it is top o' the list.

Bear Faced Boy was the solo project of a Bristolian called Richard. He was also part of the noise group Front Towards Enemy. I first met Richard when Dieter Muh played the Slimelight Club in London, 2004 (Excellent gig alongside Naevus & Knifeladder) and he and his then (business) partner, Liz, offered us a gig in Bristol. We corresponded for a couple of years as his BFB project took off, as did his company Abrasive Productions (I still have the T-Shirt). Dieter Muh did a couple of performances in Bristol courtesy of Abrasive. A great night at The Cube Cinema with Stimulus and Putrefier, and being part of the Venn Festival with Anti-Valium & Anenzephalia. Brilliant nights. Then there was talk of Bear Faced Boy teaming up with Gaya Donadio and the group Project FAHR. Whatever became of that? Richard moved from Bedminster to London, Liz from Bedminster to Berlin and I've never heard from them since. Shame? Yes, but our meeting and friendship for a couple of years remains as a happy memory.

Any HNW or PEPE fan should own this release.