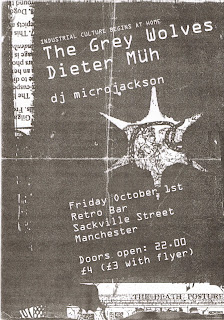 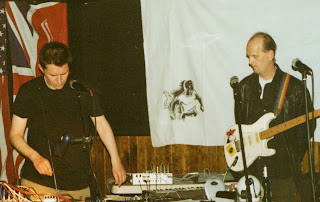 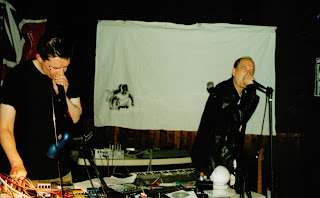 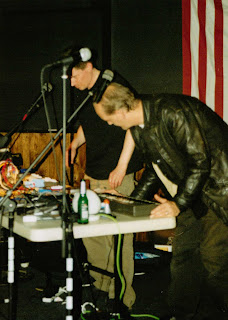 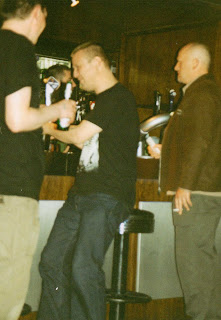 There are a few, not many but a few, live performances by Dieter Muh that when I cast my mind back to them make me wince, make me purse my lips and let out a short exhalation of breath, make me think of the word "why".
Manchester 2004, Dieter Muh Live Performance number 29 is such a gig.
Today I was filing stuff, sorting out stuff for Helsinki and generally pottering about when I came across an envelope of pictures I had not seen in years. Pictures taken by Gary Warmington of that fateful night in Manchester. I thought I would share.

Since the formation of Dieter Muh I always wanted to play live in Manchester, to return to the place where it all started. (My adult life that is). I still do and if anyone reading this could get me a live spot in Manchester please get in touch so we can talk. Anyway, back in 2004 it transpired that a friend knew a friend who knew somebody that could get hold of a room with a PA and bar at an incredibly cheap rate and was prepared to put on Dieter Muh. The venue used to be called The Swinging Sporran back in the 1980's and was once an old haunt of mine. (I saw The Electro Hippies there in 1988). Now the venue was called "The Retro Bar". I asked Dave Padbury (AKA Dap) of The Grey Wolves if he would be interested in playing too...he's only down the road in Salford....for an evening of free drinks....and Grey Wolves were added to the evening.

All is good. What could go wrong?

Firstly, the gig was not advertised at all. I arrived in Manchester the day before the gig to catch up with old friends (except Christophe) and do some secondhand vinyl shopping and whilst walking around Manchester + Hulme I saw NO flyers or posters for the gig. Not even Affleck's Palace or the Vinyl Exchange on Oldham Street. Poor, very poor. Alarm bells should have rang.
Soundcheck was good. All sounded good, especially my guitar and Dave's treated vocals. The PA was magnificent. Crystal clear. The Grey Wolves (who also included Mike Dando for the evening) were happy with the sound too.
This was the third time Dieter Muh had played on the same bill as The Grey Wolves, the last time was back in 1999 and another bum-clenching piss-poor gig at The Fenton in Leeds.
For two or three hours we sat and waited for an audience. It became obvious that anyone who showed needn't pay the admission fee, they could just come and watch. But nobody did show. Dieter Muh and (for the first time ever) The Grey Wolves live in Manchester and nobody showed.
Much drinking ensued before Dave and I walked on stage. The guy behind the mixing desk had forgotten to mark our levels and what followed was an awful mess. Equipment did not work, levels were all over the place and after about 20 minutes or so and a poor attempt at the song "Bethlehem" we gave up, retreated injured to the bar.
Dap & Mike gave a great show, with Phil Taylor on slides. Loud, evocative, professional. All the things that we weren't.

Before this evening my last performance on a Manchester stage was as part of KRNFX performing a piece called "Fingers In The Stomach". 1987, Manchester PSV Club. On that evening we got turned off by the organiser (thanks Iggy) because he thought we were an awful row. 17 years later...and not much had changed.
There is no audio recording of this show - thank goodness, only memory remains and that (with age) is fading.......