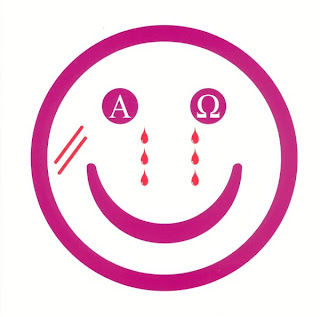 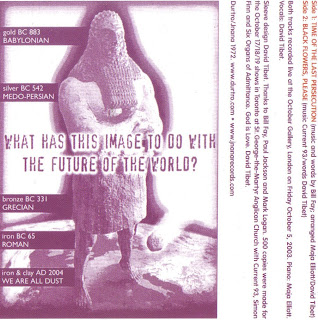 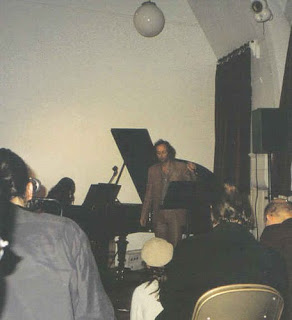 I will be brief, it is New Years Eve after all...
Do you know how it is when you hear of a release, a record or CD or whatever that is so rare that you think "well, I'll never see that"?
I cast my mind back to hearing about the S.P.K. bootleg LP "Angst Pop". I never ever thought I would see a copy until about ten years ago. Steve Underwood popped into Lincoln for a visit and a few pints down Badgers carrying a bag o' vinyl (as per usual) and he showed me a copy (an actual physical copy) of the S.P.K. bootleg LP "Angst Pop". I did explain to him before he took the LP out of the carrier bag that if I touch it the LP will be mine, but take it out of the carrier bag he did and now the LP sits resplendent in my collection.
Yesterday I received a copy of Current 93's 7" single "Time Of The Last Persecution", a single recorded at The October Gallery in London on October 5th 2003. This was part of the second Salon organised by Simon Kane & Jack Sargeant and following on from Current 93 that evening was Dieter Muh & Lon Milo DuQuette. A couple of years later and I find that Current 93 press a blue vinyl 7" of recordings from that evening and release it as a giveaway 7" at shows in Toronto. I do have friends in Toronto, but the likelihood of actually owning a copy of the 7" is nil as only 500 were pressed. But yesterday I received a copy, and beautiful it is too. As music, as memory it serves me well.
The Salon event was broadcast live on the internet and German based outfit "Information Needs To Be Free" kept the evening online for about a year...I think it has disappeared now, but I am cock certain that film from the evening can be found on You Tube!
I have the 7". I end 2010 a happy man.