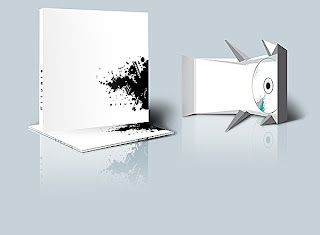 A few days back I was chatting to Philip Julian of Cheapmachines and I asked what he thought of the compilation CD "Bacterium"? We both have tracks on the album (copies still available ... please get in touch) and I was interested to hear his thoughts. Phil came back with the reply "I haven't played it yet, I've got a piles of stuff to listen to". I nodded in agreement. To tell the truth I have only played it through a couple of times, usually staggering the enjoyment, but I too have such piles. One of the joys of being a "fan" of "music"!
I buy stuff, trade stuff etc thinking that somehow this magical space of time will appear and I will be able to just sit down in the Hartop Towers gimp room and listen to a Hunting Lodge vinyl Box Set, a double Survival Unit CD pack and the latest Neil Campbell release. But it just doesn't happen. I am not complaining though! Thinking about my piles I put on a CDr I have had for a while but never played called "Rituals".
"Rituals" was released earlier this year on the Russian Cold Graey label. (Catalogue number mf17). Limited to just 57 copies and packaged in a sleeve that would confuse Robert Harbin. It is a strange release as it is by a "no named project". I must admit that this is the first time I have come across this "concept". The Alan Smithee principle applied in "industrial music"? I don't know why the people behind "Rituals" wish to remain anonymous, to me it sounds like a LOKI Foundation release of old. Maybe Predominance or Inade, or maybe Origami Galaktika or Lustmord. It does have a feel / sound of being written, performed and recorded on a computer and therefore (for me) loses an element or two, but it is not that bad to remain "anonymous".
Dark synth like drones shift around the speakers playing like a soundtrack to a yet to be made film. That's my best attempt at a description.
I don't think I'll venture in to the Cold Graey catalogue, but discovering the sound of "Rituals" was worth the time. Now, where's that Cheapmachines CD Philip gave me?