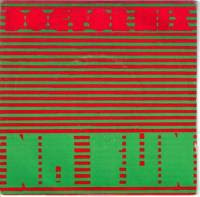 I finally have (back in my collection) one of the greatest 7" singles ever released. Doctor Mix "No Fun" on Rough Trade Records. (RT 017 - 1979). This is a beauty I have searched high and low for since 1983. (and the burglary that we do not mention). I have had to resort to EBay to get a copy...but 27 years is long enough.
Doctor Mix is the non de plume of French musician and Metal Urbain member Eric Debris. The single is so simple it is beauty itself. One man, a 4 Track studio, vocals, guitars and a Dr. Rhythm drum-machine on phase. Less energetic than The Stooges but more lethargic then the Sex Pistols version. There are only two ways to dance to this record - play it loud and you have to dance - either rock like a weeble or go insane like Ian Curtis! I do both. The B-Side is an instrumental version...with vocals.
Released at a time when some interesting covers were being released. I am thinking of Devo's "Satisfaction", Spizz Energi's "Virginia Plain" and Bombay Duck's "Sympathy For The Devil" here, perhaps one of those times where the cover is far better than the original?

Strangely enough, today I played the Zos-Kia track "Muggy the Staff" that samples the Sex Pistols "No Fun" track.
Posted by Steve at 20:12