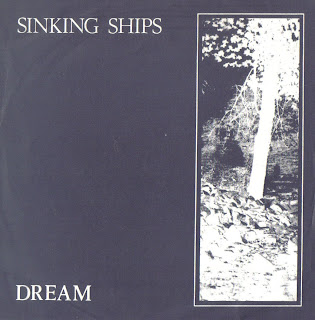 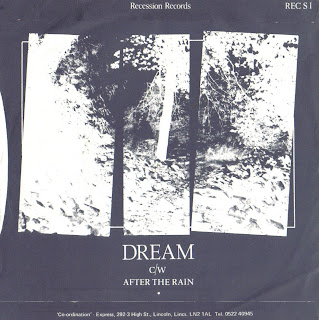 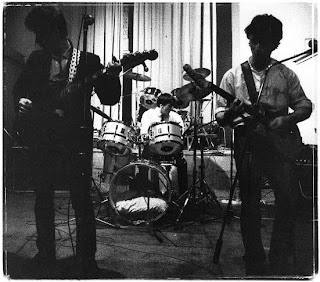 Over the winter holidays two slabs o' vinyl have been on the turntable here at Hartop Towers. The epic Hunting Lodge three album + 7" set that Vinyl On Demand put out last October and the 1981 final vinyl release by Sinking Ships.
I may, or may not, talk about the Hunting Lodge release later, but the Sinking Ships 7" has attacked me from out of the blue and become a firm family favourite.
I know very little about Sinking Ships. They existed for a very short time 1979-1982 in Lincoln. Too late for AJ's (Lincoln's premier live venue and my weekend haunt) and too early for .... well, Lincoln. I found this single lurking secondhand on the internet for a tenner (all the way from Oregon, USA. I had to buy it).
So. Sinking Ships, a three-piece from Lincoln. Terry Welbourn on Bass and Vocals, Simon Brighton on Guitar and Nick Green on Drums. I used to know Nick, he worked in Sanctuary Records on Park Street. I used to walk in there and Nick & Bev (Edwards) would chat and tell me what had come in and what I might like.....Nick gave me the first Killing Joke LP saying that if I didn't like it I could bring it back and say it was scratched. Nick was (probably) 2 or 3 years older than me, I have never forgotten that gesture.
The single is a fine slab of 1981 "post-punk" except I don't think it was called "post-punk" in 1981. There was "Indie" that was the same as "New Wave". It is like what is now termed "Goth" wasn't called "Goth" on its release as "Goth" didn't exist. (is this making sense)? Side A is the track "Dream". An opus dedicated to the voyeur. A slow drum and bass line lead the song with staccato saxophone and guitars moving around a haunting keyboard. The chorus goes: "I watch you dreaming / You think I'm asleep / And while you are dreaming / I couldn't sleep". Catchy in the extreme. Side B comes across as Sinking Ships answer to Ultravox!'s "Hiroshima Mon Amour", a live recording of the post apocalyptic themed "After The Rain". Another slow number starting with a rhythm boxed hi-hat and acoustic drums a la Warren Cann (which at times go out of sync). Again, lots of saxophone and heavy guitar chords with a strained deep vocal that has the hook: "For love.....He'd do anything / But for love.....He'd go anywhere / Anywhere at All". Catchy and sing-a-long-able in extremis! Beautiful in fact. I was 18 when this first came out. Loved it then, love it now. It is on the label Recession Records, catalogue REC S1. Was there an REC S2 or S3? I need to know.
If you like "post punk" then of course I am going to say that this single is indispensable. Images of the sound of Fatal Charm, One Gang Logic, Wasted Youth, UK Decay, Magazine all float out of the speakers when I play this single...well worth hunting down.

Back in 1980, Dave Uden and myself were in a group called So Commercial (we wanted a name like The Pop Group and it was the best we could come up with) and we had just brought in a keyboard / guitarist called Rose. (See elsewhere on this blog). With gigs hard to come by for three under 18's I decided to put on a gig at a local school. The North Kesteven School in North Hykeham. About 4 miles out south of Lincoln. The plan was to have ourselves, Collide and local power pop punk band Vox Populi play. Vox Populi were younger than ourselves! Collide had a PA so they were in! Date was set then I was hit by a couple of bombshells, firstly Collide split then Rose couldn't make the date due to family commitments. Kindly John Stafford (of Collide) said we could have the PA for nowt but I had to organise transportage from Lincoln to the venue. In off the subs bench came The Void. Chatting to The Void I asked if they knew of anyone else who would play the gig and they brought in Sinking Ships, who in turn brought along Lincoln's most finest (and John Peel favourites) The Cigarettes.
We had a gig on our hands!
I don't remember anything about the gig other than we made shed loads of money and Sinking Ships brought beer. I do remember seeing Sinking Ships support The Psychedelic Furs at the Drill Hall, and play the New Penny Club on Lincoln High Street with Collide and Fat Chance on the bill but after thirty years, like my hairline and sight; the memory is fading.

If anyone out there has Sinking Ships recordings that they would like to share or offload, please get in touch.