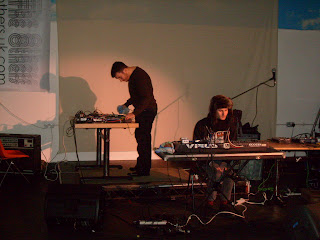 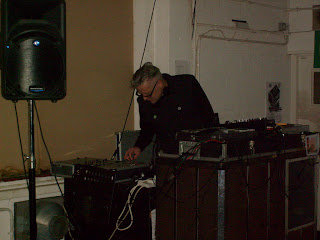 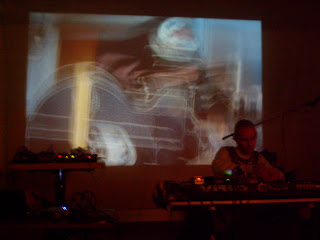 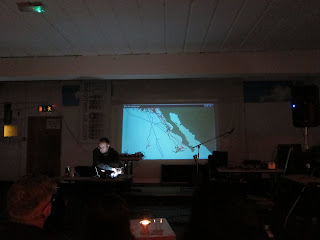 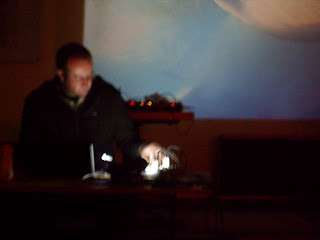 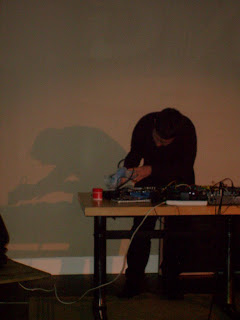 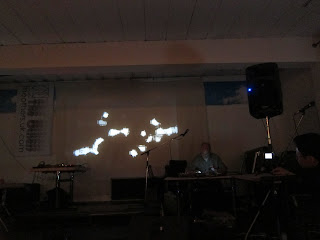 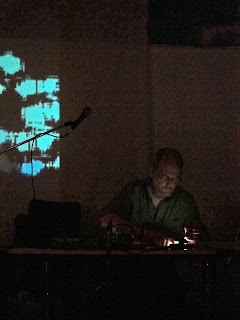 The fourth and final live performance of 2010 by Dieter Muh took place on the 9th of December inside The Others at Stoke Newington, London, an evening organised by ILL FM.
Earlier this year I went to The Others to see Feine Trinkers Bei Pinkels Daheim (see June entry) and really liked the venue. It is situated above a snooker hall off the main road that runs between Stoke Newington and Stamford Hill, serviced by various bus routes but a bit of a walk from the (overland) tubes at Stoke Newington + Stamford Hill, so a bit "remote" by London standards. I had a word in the ear of the ILL FM organiser (Tamon) and he was only too happy to add Dieter Muh to a bill. ILL FM operate a live show on the first Thursday of every month. The whole affair is very relaxed. Professional (with out a doubt) but relaxed.
Years ago Dieter Muh played events in London called "The Salon". They were organised by Simon Kane and Jack Sargeant. The whole idea was not to perform as if we were promoting Dieter Muh but to perform for our pleasure and to let the audience explore our sound - through the act of performance and conversation: "Aut Delectare Aut Prodesse est". It was at the Salons that a friendship with Lon Milo DuQuette was born. This evening, at The Others, gave me the same feeling, none of the performers were out to push merchandise (a pointless exercises as most folk in the room seemed to know each other) but just to explain where they are at at this particular moment in time. It is a very liberating feeling. I had a feeling that 99% of the audience were themselves artists / performers on some level.

DJ Andrew Trail, ex of Knifeladder / Anti-Valium and now of Inertia kicked off the evening (and between sets) with a fine collection of sounds, mainly 1970's "industrial" stuff, with a bit of Krautrock + EBM, the stuff I like to hear. I seem to remember Andrew holding down a DJ spot at the London niterie "Heaven" a few years back...I could be wrong. Good stuff though. I told him that if I ever get married "again", he can DJ at my wedding! (my last wedding had an all star DJ cast with Idwal Fisher and members from The Duds, Putrefier and Appliance leading the decks but I don't like to brag).
Aqua Dentata is the solo project of Eddie Nuttal. Eddie is also a member of London trio Baraclough. Aqua Dentata were the first live performance of the evening. Eddie played with a backdrop film of the BBC programme "The Blue Planet". I thought it was assisting the "Aqua" theme, but I was wrong, it was the choice of ILL FM. Parts of Eddie's sound fitted the film beautifully, cascading keyboard chords, rippling minutae at times mesmeric, but as the film drifted in to talking heads and it became apparent that this was not a film to assist the sound but just something "visual". It was being shown because...it could.
Now, it was during the Aqua Dentata piece that one of the negative sides of the venue became apparent. And I noticed this last June too....the way to the toilets & fagamamas (outside square of the Faggamuffins) is situated behind the area the artists have set up, thus causing A; Visual distraction and B; Noise distraction with the clumping of toilet doors. A shame.
I will buy Aqua Dentata releases when I hear about them. Keep an eye on www.baraclough.co.uk
Next up to the oche was Cheapmachines, the solo project of Philip Julian. Cheapmachines really need no introduction. A stable London presence for .... well this century anyway. This was my first witness of a Cheapmachines live set. I was expecting Philip's table to be full of (well) Cheapmachines. A table top sponsored by Fisher Price & Tandy but no, it was a table top advertising an Apple Mac. (Perhaps Philip bought it cheap)? Phil started loud. Very loud. To my ears it sounded like a multi-layered, multi-looped bass guitar through distortion and effects rolling about the place. Think early Non. Then it cut to sinusoid silence. It was excellent stuff - but once again the toilet door became a distraction - along with the same David Attenborough film being shown! Cheapmachines played for as long as his Apple Mac battery lasted which was around 20 minutes. Good set.
For Dieter Muh I wanted to do something completely different to September's Paris gig and treat the evening like I was displaying work in progress. I, again, played along with the film "Armenia 1913" by Tim Bayes. (So long David Attenborough)! I presented three pieces. The first using samples of the Muh 7" "We're Not Happy...Until You're Not Happy" with a heavy church like organ sound supplied by Schuster, I mixed that in to an old Dieter Muh piece called "Middle Of Silence". This was a collaboration project that was started in 2001 with Swedish performer Ingrid Engaras and her group "Vibrasag". The collaboration came to nothing ... unfortunately. With this track I played around with a variety of samples, mainly effected bowed cymbals and the pulse from "Everything Stops" from the "Tertium Organum" LP. What was coming through the monitors (yes! monitors...I said the set up was professional) was crystal clear and I had two ways for the sound to go. One way was to bring the sound down, and the other was to crank it up to 11. I went for the latter and brought in a rhythm (again supplied by Schuster) called "Stubborn" and shouted a stream of conscience in to a micriophone. Joy.
23 minutes.
The final live performer of the evening was BBBlood. Baron Bum Blood aka Paul Watson. Like Cheapmachines BBBlood has become a staple on the London live "circuit" over the past few years. This year I have grown to like the sound of BBBlood through a varity of releases on a variety of formats. Tonight Paul sounded like a 1990s ( a late 1990's) Putrefier. Lasting as long as his energy level held out Paul entertained us with contact mic wrapped in bubble-wrap and kidney bean down the throat and contact mic in cigar tin bounced across a wooden table through a multitude of looping and distorto devices. It was an unforgettable piece of audio-visual art and one I won't forget in my lifetime. An excellent piece of improvised noise - and no David Attenborough!

And so the evening was over. All recorded by ILL FM and to be added to their website shortly. The evening was supposed to be streamed live across the internet but due to a technical problem folk who tuned in (including my wife) got the sound of bad heavy metal (is there any other type) and jungle music (that is not a racist term, but an actual genre) live from Manchester. Any way it will be available for download soon. (Please download and mail me a CDr as I don't have the capabilities here at Hartop Towers)!
I would recommend playing The Others to anyone. I would also recommend getting in touch with Tamon at ILL FM and asking the possibilities of playing. It is also nice to see that Max at Transient Constellations is also using the venue.

I also got to meet the guy behind the label The 7:17 From West Wittering Is Late Again ... and it ain't Steve Fricker!