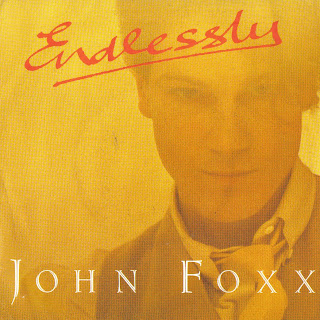 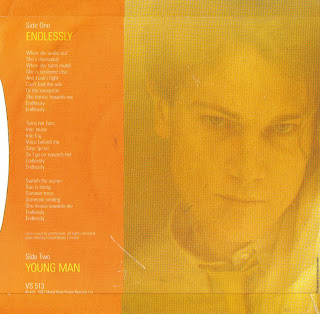 I have had this John Foxx single spinning on the turntable for most of the weekend. "Endlessly" is a beautiful song, sounding very much like a George Harrison song of old, kind of George Harrison "Blue Jay Way" mixed with Ultravox! "When You Walk Through Me". Floating sitars and pronounced strings, it is a beautiful sing-a-long-a-Foxx-song.
Released in 1982, this was the last John Foxx single I never bought. From the first solo outing; 1980's "Underpass" (bought on the same day I went to see The Clash in Leicester) through to 1981's "Europe After The Rain" I bought and loved everything John Foxx released. Well I say "loved" but I did find parts of "The Garden" LP a bit patchy. Still, compared with what the other three "C's" left in Ultravox were producing (that's Currie, Cann & Cross) with Midge Ure - taking the great name of Ultravox! in to the mud, "The Garden" is a classic album.
I now have the 7", and it acts as a leveller on two fold. I say it was the last Foxx single I never bought because I saw him perform this song on TV (probably "Top Of The Pops") before listening to it properly i.e. in the full stereo effect which it deserves. Reverse sitars and drum machine..the song has reversed sitars and drum machine...it is beautiful. But I would have seen John dancing around all new romantic (like) on the TV and thought, no! the man's past his sell by date. I am now after the "Golden Section" LP the single is culled from. Second fold. I once tried to buy this single on EBay (many years ago) and chased it up until I got outbid at around a fiver. A few weeks later I found the single for 20 pence in a secondhand record shop in Barnstaple, Devon and 20p is just about how much the single is worth. I stopped EBay buying very soon after.
The B-Side, "Young Man" is pretty poor. Sounds like a Thompson Twins out-take, a Thomas Dolby album filler, but at the same time a song I could imagine finding on a Death In June LP from the late 1990's.

I am now back on EBay - I had to buy some old Nekrophile Tapes, but this single has served me well - I have just backed out of a bidding war with a couple of people over a single by The Smirks. I found myself bidding over £4.50 for what is (essentially) a ten bob single. I have been outbid (thankfully). I shall keep searching the secondhand vinyl shops, charity shops and record fairs for The Smirks "Rosemary"...and I bet I'll find it for under a fiver!