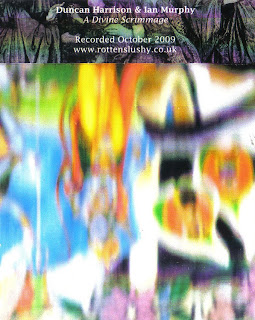 Just spent a pleasant while listening to the latest offering from Brighton based independents Rotten Slushy. Duncan Harrison & Ian Murphy's "A Divine Scrimmage" CDr. I think a scrimmage is a skirmish or struggle, but I could be wrong....The CDr lasts 30 minutes and like a game of football it is in two halves.
Duncan Harrison is a member of Plurals and after their rather superb "Six Eyes" album released earlier this year anything with this mans name on it is a must hear. Ian Murphy is a member of Brighton based Hobo Sonn of whom I know extremely little - I have their 2008 release "Old Smoake Golden Shred", it came with this CDr, but I have yet to listen....
OK. One track, two halves. The atmosphere built in the first ten minutes or so is of being lost at sea in dense fog. Mystery sounds float around a miasmic swamp of swirling synthesizers and electronic gadgeting slowly building (after a quarter of an hour) in to a cacophonous crescendos climax. 18 minutes in and the track is dead, arises and struggles to claim its' former glory. It took me about 5 minutes to get back in to this piece again, but I did as the track fades out. Good stuff, a very original piece of work that'll get played often. If it comes close to anything else I have heard I would plump for very early Camberwell Now. "The Meridian" 12".
This CDr is selling for a fiver and well worth the money. (Bloody awful sleeve though)!
www.rottenslushy.co.uk
Posted by Steve at 20:11