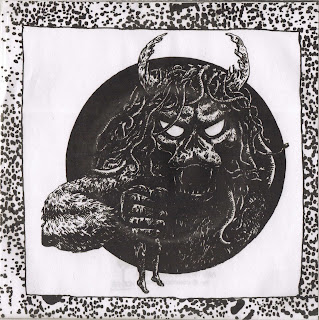 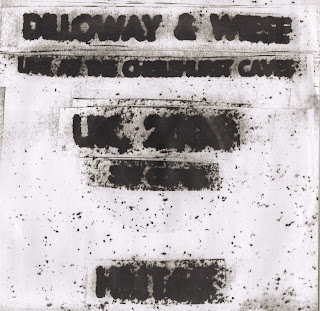 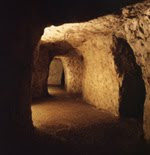 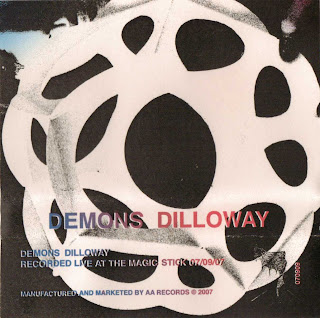 Ahh, the January sales. I think it was last year that I picked up some bargainous Aaron Dilloway releases (vinyl & CD) from Norman Records of Leeds, this year I have bought some great stuff in the sales from Blackest Rainbow of Scotland and alt.vinyl of Newcastle. Both promptly delivered and friendly - both UK distro outfits are recommended.
Both Dilloway releases are live recordings. Firstly comes the 7"EP "Live At The Chislehurst Caves from 2007, released by Hanson Records. This is a collaboration with John Weise. I do not know whether or not these are recordings taken from a visit to the caves and then used in a live recording or a recording from a gig that actually happened inside the caves? Following in the footsteps of Mr. Bowie, The Rolling Stones and Led Zeppelin. The caves were a venue back in the 1960's, but as far as I was aware hadn't been used for gigs since. (For those who do not know, the caves are in London and used to be used for sheltering from the doodlebugs during World War 2). Anyway. Excellent single. Side 1 - hard looping, really hard looping stuff, I am taken (a)back to the late 1970's industrial sound of TG + Boyd Rice, in fact the single plays like a long lost gem from that era. I get excited. Hanson Records recently re-release a cassette by Z.O.Voider, originally recorded and released in 1987 - that too is like discovering some long lost industrial gem. The Hunting Lodge triple LP set on Vinyl-On-Demand again is a pure joy for all of us who actually enjoy "industrial" music. This 7" fits in. Side 2 is mellower in sound but still hits the button.
Demons & Dilloway is a cassette on the US label AA Records, again from 2007 and recorded live at the Magic Stick. I do not know if Magic Stick is a venue or name of a recording studio? From the off we are into some real heavy rhythm loop (I would imagine from Mr. Dilloway) then other members / players take the part in this beautiful soundscape of noise. Obviously improvised loops and hook lines weave in and out for 30/35 minutes, there's bass guitar, scraped metal, guitar, synth and FX sounds all mixed in. On headphones this is a joy.
One thing that makes me think that this isn't a recording from an actual gig is when the real heavy loop sounds come in and the sound is one of ecstatic bliss, there is no whooping and a hollering from the "audience", and America is the land of the birth of a whooping and a hollering and if there was an audience they certainly would be a whooping and a hollering - unless (of course) they're all stoned - or stoked as I believe it is called in America....
Anyway. 2 excellent releases that everyone should own (or hear). God bless the January sales!