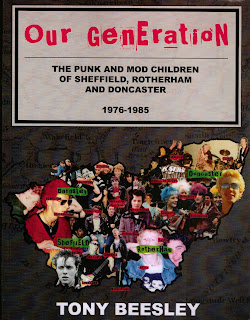 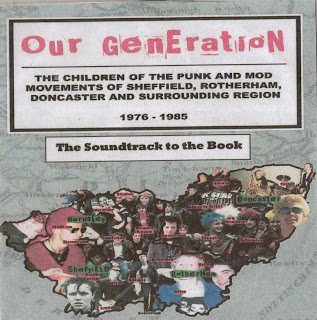 I have spent the month of December reading "Our Generation:The Punk And Mod Children Of Sheffield, Rotherham And Doncaster 1976-1985" by Tony Beesley. I was expecting to be reading the story of Bill Nelson & Be Bop Deluxe but Amazon are bloody delaying on that gem.
This is a thick book. 444 pages. It has turned out to be one of the strangest / funniest books I have come across in years.
The book is written in such a strange way. Eyewitness accounts, couples with narrative and factual passages. Nothing strange there, but Tony writes all three so in places there is a block of information about the state of "Punk Rock" in the nation followed by a narrative of how "Punk Rock" was being perceived and received in the South Yorkshire triangle of Sheffield, Rotherham and Doncaster followed by quotes from "Tony" repeating what has just been written but from a "personal" viewpoint. Very bizarre to read. Then of course follows a list of folk who where there at the same time telling the same story with no added insight. Although I have mentioned this, it is not a criticism of the book itself. I found it (on the whole) very enjoyable and in parts unputdownable.
I think "being there" helps. I wasn't in the vicinity of South Yorkshire, but the book wanders off to such places as Lincoln's AJ's (as I have mentioned before - the usual place to find me at weekends throughout 1978), Retford Porterhouse (The Slaughterhouse as it was known) and Nottingham Sandpipers. I did try and get my mother to drive me to Doncaster once to see Ultravox! at the Outlook in 1978, but she declined. (I have forgiven her). It also mentions some of the gigs I went to at the big venues like Sheffield City Hall. The Clash "16 Tons Tour" + Ian Dury & The Blockheads "New Boots & Panties" tour. Fond recollections. Tony and friends also capture the violence of the times well too. That is something I try and tell folk, just how bloody rough the gigs were, just wearing a pair of straight-legged corduroys and having short hair was enough to be chased and (if caught) beaten up. People died. That is one thing that always has to be remembered. People died. I had the shit kicked out of me at a Stiff Little Fingers / Starjets gig at Lincoln Drill Hall by some chap who didn't like "punks" - what the hell was he doing at a SLF gig then? (Well the bouncers on the door used to let their mates in for free once the gig had started to kick shit out of folk they didn't like the look of. I know. the question was rhetorical).
Sometimes the book reads like Tony has just lifted passages out of his diary, aged 13 and a half and at these points I winced. Also the book has a fair bit of mis-information in its' pages...can't remember what (I wasn't making notes whilst reading) but I can remember that he thinks Cash Pussies was Alex Fergusson backed by Throbbing Gristle doing an "Anti-Sid" song. Sid is one of Tony's heroes. As is Joe and Paul. Tony (for a while) bought the punk package, sneering at folk who think punk is a fashion then buying clothes from the back of the NME and "Jam" shoes.
A large part of the book follows folk who went on to roadie for Sham 69 and The Cockney Rejects and then in 1979 most of the folk turn in to Mods...because "punk" was becoming a mainstream fashion (I think). I must admit to speed reading and skipping a lot of the last two chapters. Again. Paragraphs and paragraphs of senseless re-iteration.
The book comes with a CD of the local bands mentioned, all which were new to me although I have a feeling I saw The Vice Squad (Chesterfield not Bristol) play with The Whizz Kids at AJ's. I could be wrong though. The CD is awful. Cute Pubes are OK and X-Rippers sound professional but the rest is simply teenagers wanting to sound like their record collection.

The book cost £20 from the Sheffield Vision website. If local to South Yorkshire / East Midlands then buy this book, if interested then (available from the same website) I recommend "Beats Working For A Living" by Martin Lilleker.