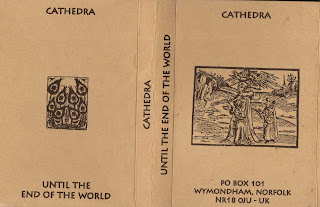 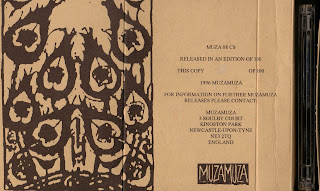 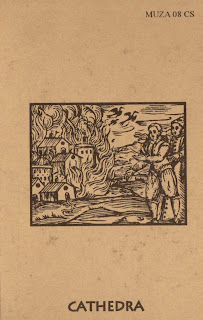 Just spent a pleasant while listening to an old cassette by Cathedra. It was whilst playing the Astral Social Club "Smashed Tractor" CDr that got me thinking...the sleeve reminds of an old tape I've got. The tape is "Until The End Of The World" by Cathedra. The cassette was released in 1996 by Newcastle based label MuzaMuza and limited to 100 copies. (I have #2).
Whilst playing the tape I was thinking how I came about owning a copy - I reckon it was a gift from my old "housemate" Mick McDaid from when we shared a house in Lincoln back in the late 1990's. This was all (of course) pre-internet, and up until now (studious research) I had no idea who Cathedra were or was. There is a clue on the sleeve, a contact address based in Wymondham (pronounced "Win-Dam"), Norfolk. To my knowledge there are only 4 folk producing "experimental synthesizer based" music in Wymondham, Norfolk. Two are Chris Carter & Cosey Fanni Tutti, and Cathedra ain't them, one is Glenn Wallis and although the sound has Konstruktivists moments I am certain Mick would have said it was a Glenn "side-project", infact Mick would not have handed over a Glenn Wallis cassette so easily! The other person is Mark Crumby. Is Cathedra Mark Crumby? Turns out (studious research) the answer is yes.
Well, there y'go. I remember Mark Crumby from the days he produced "Impulse" magazine, a fine magazine from the mid 1990's that came with a tape. I still have a couple. The magazine was rather usurped by "Music From The Empty Quarter" at the time, but it was still an essential read. "Impulse" stopped and Mark set up Jara Discs. I have a copy of the Muslimgauze single "Nile Quartra" that he put out but the label (at the time) passed me by.

Fast forward a couple of years to 1999 and I am (as mentioned) sharing a house with Outsider Records supremo Mick McDaid and he gets a letter from Mark asking if he wants to buy some records he is selling. (Pre-internet days. Letters. Crazy)! On the list is the Mass LP "Labour Of Love" on 4AD and "ACC" 7" by Robert Rental on Regular Records. Mint condition. I buy both. I cannot understand why anyone would want to sell these two slices of classic vinyl, but to Mark I am eternally grateful. I wonder if he regrets the sale? The vinyl has gone to a good home.
I would have thought that Mute Records would have put out some Robert Rental retrospective collection on CD by now. He and Daniel Miller were great friends. There is the "ACC" single & the Mute Records released "Double Heart" 7" as well as collaborative works with Thomas Leer and Daniel Miller. Rehearsal tapes must exist for the Miller/Rental tour, they simply must. Then there's the Robert Rental tape "Solo" that doesn't seem to get a mention on any discography, but I have a copy, not original but a TDK C60 mailed to me by Dan Plunkett of ND Magazine fame. Others must have it? Where is that Robert Rental CD?
Anyway. Back to Cathedra. Now I know it is the work of Mark Crumby I can hear the Konstruktivists "influence". That is not a bad thing. I like Konstruktivists, "Psykho Genetika" is a classic album. There is a tinge of Bushido in the Cathedra tracks. (Third Mind Records link). I have played a gig with Glenn Wallis and found him a truly fascinating man. Funny guy, real funny guy. But, Cathedra is Mark Crumby and I may write about my 2 days in a small Belgian town in 1998 with Glenn later.....
The cassette is instrumental. Side A has an Eastern feel, Polynesian / Japanese rhythms, sounding like an accompaniment to S.P.K's "Songs Of Byzantine Flowers" album. A hint of 23 Skidoo and (as mentioned) Bushido and Konstruktivists. This was 1996, and good stuff. Side B starts with the track "Netherworld". Jaunty synth keyboard notes and a cascading rhythm, it made me think of soundtracks to Building Society adverts or ....... no, Building Society adverts. I thought to myself, I bet these guys have gone into advertising. (I did not know it was Mark Crumby. OK)! A track of grand piano leads into the cassettes magnum opus: "Momento Mori". I think this was recorded live as the levels are a little haywire to say the least. Tibetan style percussion over Gregorian chants with pieces of German Radio. (Deutsche Radio). I love voices on German Radio. There are keyboard surges and on a couple of occasions what sounds like a seal playing a car horn and the track is far too long but that doesn't stop it from being a really good listen. I did get lost in it all, but then came out as it went on beyond its necessary time.

Over all a great cassette and I am really glad I dug it out and gave it a listen. I'm tempted to buy the Cathedra 7" "Valediction" on Jara Discs. Now where is my copy of NKVD/Heute "Prior To Intercourse"? I'm going to give that a play tomorrow.