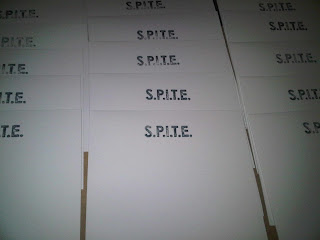 2010 is an active year for Harbinger Sound. As the catalogue reaches its' one hundredth release Steve (Underwood) is clearing the path for the mighty Harbinger Sound 20xLP box set. He has put out half a dozen releases already this year...and it is not even the end of April.
A package came through yesterday including the S.P.I.T.E. 12" ep "Violence".
S.P.I.T.E. are a new one on me. This record is a re-release of the 1982 cassette originally released by Broken Flag Records. S.P.I.T.E. was the solo project from Ramleh member Gary Mundy. Simply packaged in a white cover with a rubber stamp the 12" comes with no information (except a free Ramleh poster advertising the new CD Box set "Awake"!). I imagine that the original cassette came with typical Broken Flag art work of WW2 atrocities, or the face of a serial killer or likewise and the title "Violence" would have seemed quite apt. Take away that and what we have is quite a mellow sound of a Korg Synth (and/or WASP) going through a variety of pitchshifting and phasing and the odd echoed vocal swimming around the back. No sound of "Violence". It is good stuff, and a worthy release cut direct to vinyl from the cassette - no remastering here. It does take me back to the early 1980's when a group of us discovered the likes of Ramleh, MB, Lustmord, Whitehouse etc and got excited by this "new" sound.

The record is limited to 200 copies and probably sold out by the time I've finished typing this!
Posted by Steve at 14:23