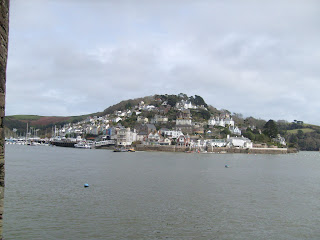 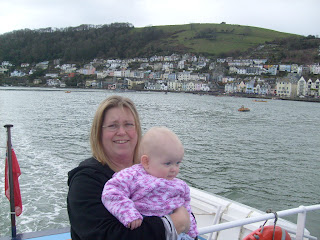 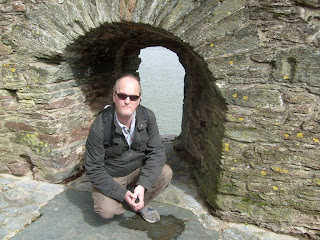 Loose end Saturday. We were to try and get to Plymouth but indecision and a grotty weather forecast changed our minds. For the past seven weeks we have become a car owning family, and on loose end Saturdays Devon + Cornwall has become our oyster. Today we decided to play it close and head for Kingswear, neither of us (Tamsin (the wife) and I) having ever been there before and it being 30 or so minutes drive from Hartop Towers.
Kingswear is in a district of Devon known as the South Hams and lies across the river from Dartmouth. Apart from a couple of shops; the Post Office and the Kingswear Teddy Bear Centre and two pubs - one of which allows dogs but not children there is nothing to Kingswear. I have done longer farts than the time it took to walk around Kingswear.
There is however the ferry across the River Dart to Dartmouth. (£1.10 single - no return tickets). We went to Dartmouth once in 2008 and I vowed then "never again". There is nothing to Dartmouth, but with an afternoon to "kill" we found ourselves on the ferry across the Dart. There is nought of interest in Dartmouth. No second hand vinyl shops. just the one charity shop that is so ridiculously expensive (Cancer Research) it might as well cut the crap..... All other shops are designer clothes, designer jewellery or little "art" galleries selling over priced pictures of boats by "local artists". Vegetarians can not eat out in Dartmouth. We have tried it twice now. The arts centre/indie cinema (Showing "Nanny McPhee + The Big Bang") cafe is Ham and Fish orientated - we made for The Royal Castle Inn (wish it was the Roy Castle Inn but never mind) for a meal that was delicious but cost a weeks beer ration! There is a meat market and a castle to visit - the castle is way down the river and requires a car....The streets are too narrow and Dartmouth is full of old folk pushing other old folk around in wheelchairs dressed in nautical gear (Blue&White hooped shirts, white slacks etc) and stopping without warning. Infuriating - and did I mention they have no second hand vinyl shops?

If ever visiting Devon, please avoid Kingswear + Dartmouth your time will be better spent elsewhere I promise you......

Pics:
1: Kingswear.
2: Tamsin and Isabel on the Ferry (Dartmouth in the background).
3: Myself in a ruin. (And probably a puddle of dog piss).
Posted by Steve at 20:41