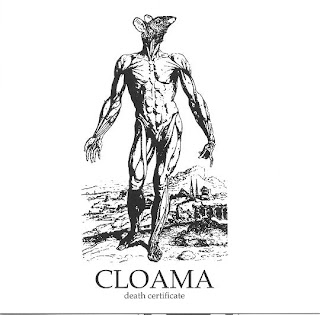 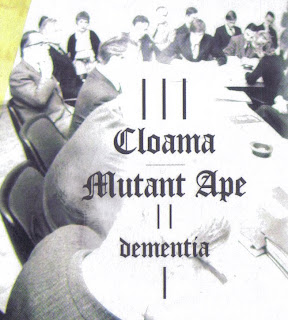 This year I have been getting "back into" the sound of Cloama. I have been attracted by two 7" releases I spotted on the Internet.
I used to follow the releases of Cloama up until about 3 / 4 years ago when I got the Grunt/Cloama CD and the "Revisionist Knowledge" CD, both Freak Animal Records releases. These two were (exciting as they sound) quite disappointing and standard fayre, and as the world is full of "standard fayre" ... and I can listen to only so much in what is a very shortening lifetime, I decided to leave Cloama alone. It was in the Unrest Productions catalogue that I spotted the "Death Certificate" 7"EP and both the title " Rat With A Human Face" and the description "Cloama Unplugged" grabbed me. I liked the idea of Cloama "Unplugged". The 7" is excellent. "Rat With A Human Face" is acoustic. Scraped and beaten percussion over the vocal. The B-Side (2 tracks) contains "Death Certificate" - a return to Cloama of old, guitar driven and very powerful. Old school Power Electronics - if there is such a thing? The 7" is limited to 250 copies and well worth the money.
The latest acquisition is the split 7"/CDr with UK based Mutant Ape, and on the Turgid Animal label. Last year I was talking to someone (physically chatting as in face to face not Internet chatting or e-mithering) and I can't remember who but we got on to the subject of Turgid Animal and this person said it was a shit label releasing shit. I didn't cut in and mention I've a couple of Dilloway 7"'s and a Culver 7" on the label that I think are fine releases, just let the person carry on and nodding politely. I wish I could remember who it was as it is bugging me now! Anyway. Turgid Animal, a label ran by George Proctor AKA Mutant Ape. I met George once in London when he was co-promoting the Dieter Muh / Skullflower gig at St. Giles In The Field church. Big lad with a lovely Yorkshire brogue. True, Turgid Animal has put out some things that (on paper) look poor, but what I have on the label I'm very happy with.
The Cloama track "Procedure Dementia" is a lovely piece of old Industrialia. It does sound like early SPK. Excellent pointy guitar loop/riff with garbled voices and a bank of distorto noise. It is like Cloama of old. The excellent LP on Blade Records or the 7" on Cipher Prod. Lovely stuff. The Mutant Ape track is OK, and the accompanying CDr is pretty disposable. The CDr "Dementia" is a 27 minute remix of both tracks which takes me back to the Cloama of "Revisionist Knowledge" etc. I think the 7" is limited (again) to 250 copies and if seen cheap (mine was a fiver) then buy it for the Cloama track alone. There is a full CD on Turgid Animal to follow.

I was introduced (literally) to Cloama in 2000. We played on the same billing at "Kaos Ex-Machina 1" in Mantsala, Finland. Cloama is the side project of STROM e.c. member Jasse Tuuku. Previously I had been listening to a lot of what is now known as Power Electronics. Stuff like Genocide Organ, Soldnergeist, Drape Excrement, Einleitungszeit, Putrefier, Con-Dom etc. After spending a long time not listening to music at all, then hearing a lot of stuff that was catagorized as "Jap Noise" - which (with me) did not always hit the nail on the head - then hearing the likes of the aforementioned it was like a natural progression (in sound) of late 1970's "industrial" music. STROM e.c. where in that group too. On that night in Mantsala Cloama did a set with Mikko Aspa on balaclava, oil drum and vocals, and STROM e.c. were blinding. I was a convert to live power electronics.
I saw Cloama live again in Leeds 2004 where Jasse made mincemeat of The Bongerleros (could be miss spelt) and US comedy act Slogun. Grunt were also on the same night making the same kind of mincemeat.

I shall keep an ear out for the Cloama album on Turgid Animal, I suggest all to do the same.