The Sound Of Lithuania #2 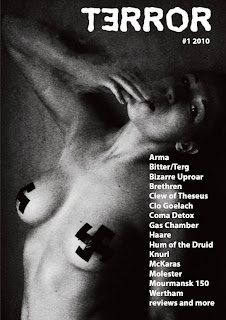 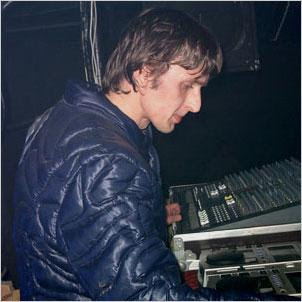 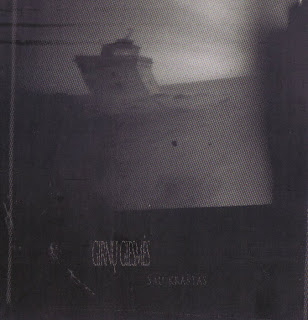 Received my second package from Lithuania last week. A trade off with the magazine "Terror". As the world waits for the magazine "As Loud As Possible", two magazines dealing within the similar area/topic/genre (whatever) have come out. Mikko's "Special Interests" and "Terror" from Lithuania. Both magazines are A5. Packed full of interviews and reviews and has such small print that I have to strain my eyes to read even wearing my glasses! "Terror" features interviews with projects with silly names such as The Hum Of The Druid, Clew Of Thesus and Molester. I also note that most of the projects featured perform or have their pictures taken wearing masks and/or hoods. One chap even poses with a pair of black tights on his head. That made me smile... I've been dipping in and out of the magazine over the past few days and although none of the interviews have made me think I must hear them I have enjoyed the read. Extensive reviews and I have learnt that there is a Survival Unit double CD called "Fentanyl Martyrs" that I want. I will buy issue #2.
Also in the package was the latest cassette release by Lithuanian noise/power electronic project Pogrom whose split release with Oorchach I really enjoy. "Liberal Cunt" on Suomi label Filth And Violence. This full release is a little disappointing. Two long untitled pieces a side, side 1 starts in the USA PE vein. It sounds like Slogun. And Slogun, to me, sound like a poor man's Con-Dom. It ends on a high note of "old school" industrial style metal percussion and noise. Side two is the sound of violent sex and child birth with synth noodling and the odd cries of a baby. Yeah, that's what I thought.....Throbbing Gristle managed it to perfection with "Oltre La Morte/Birth And Death" on the album "Journey Through A Body". (1982).
Also in the package was a promo CD of Girnu Giesmes called "Sau Krastas" (roughly translated means "Yourself Crust"). Girnu Giesmes is a project from Lithuanian artist Laurynas Jukonis who began making sound in 1996. (This CD was released last year). Only 40 minutes long. Five pieces of deep ambient electronic drones. Very bleak, cold feeling sounds. Very spacial. I played it loud and enjoyed - a good discovery. I think it is on sale via Discogs for 4 Euros or something as daft.
There was also a Budrus CD in with the package, all in all good stuff - I await another package soon!