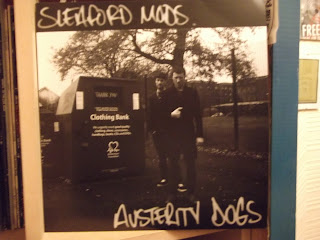 I can't remember when I first heard about Sleaford Mods, I remember who told me about them...but I can't remember when but as soon as I heard the name I knew I had to hear them. Back in my youth when my dad was a solicitor he worked in Sleaford, my mum used to work the market there, Sleaford is a lovely little Lincolnshire market town built around the River Slea. I had a mate who lived on the Boston Road, we used to creep into Bass Maltings, an old abandoned brewery and muck about. Shout and chuck things, beat metal on metal .. should have recorded it, eh? (We weren't under curfew).
And now there's Sleaford Mods and Steve Underwood loves them enough to tell me about them. Quite obvious that I was not going to be hearing some Purple Hearts, Lambrettas, Secret Affair type o' shite, but I wasn't quite expecting this.

Lest we forget the days when record label following was fun and exploratory. Labels such as Small Wonder who would put out Crass, Bauhaus and Murder The Disturbed or the beginning of Rough Trade when one week it's Metal Urbain, then a slice of Cabaret Voltaire and then File Under Pop. Great days. Harbinger Sound is a label worth following, so far this year they have released new stuff by Cremation Lily, Spoils & Relics and Sleaford Mods (and I'll put in the Vagina Dentata Organ live LP at the end of 2012) releases that are diverse as they are essential. Harbinger Sound is not a "noise" label. Admittedly the Sleaford Mods LP has "thrown" a few people ... after a slew of "noise" re-issues from the Broken Flag back catalogue this is quite understandable .. but let's reiterate here. Harbinger Sound is not a "noise" label.

Sleaford Mods are a two-piece. Jason & Fearny. One has a voice the other a laptop. The album also features the bass guitar of R.J.Chisholm. It's the bass lines that grab me, punk driven punching riffs that are infectious and get my head moving and the feet tapping. Bass lines around a snappy snare with a techno-style beat. The sound is unique, and more so because of the voice. Jason Williamson. Witty dry lines of vitriol and "everyday life" spat out with an East Midlands drawl by a guy with tourettes. This is not John Cooper-Clarke territory, this is not funny haha like Alexei Sayle and "Hello John, Got A New Motor", this is reality speaking, the zeitgeist, the now, the Nottingham sink estate, the voice from Ladbrooke's. I could reel off the titles or quote some lines from the tracks but it won't read or capture the brilliance of this LP ... for that you need to hear Jason's voice. The songs will stick with you, I've had them going around in my head for the past few months.
I was lucky enough to catch Sleaford Mods live last year. It's a frightening sight, like watching Sham 69 back in '78...the feeling that at any moment something would spark a riot and that the band would just love to join in. Tense - that best way to describe their live approach. After one song some of the audience laughed..."What yer laughing at? ... This ain't meant to be funny.. I'm not telling yer jokes". Polite applause ! I've recently seen Sleaford Mods billed as Hip-Hop for a future live gig .. I would argue that. Sleaford Mods are punk.

This is an important album, it'll probably get in The Wire's top ten and we'll hear Sleaford Mods on "Loose Ends" ... hey...weirder shit has happened. It needs to be heard and you need to listen and just to reiterate Harbinger Sound is not a "noise" label. The LP should be available from all decent distributors, but if you're daft enough to be on a Facebook then check out both Sleaford Mods and Harbinger Sound that way.