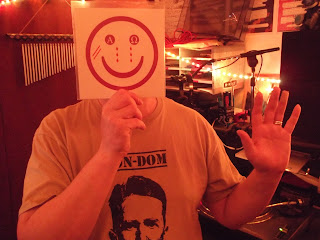 Another broadcast. This one was supposed to feature exclusive material by Finnish masters Grey Park, but unfortunately the cassette machine at the studio is still "kaput". The programme also had a possible new feature: Singles by The Glaxo Babies & Eyeless In Gaza were released on the day of broadcast in 1979 and 1981 (respectively) and armed with my copies of George Grimac's Punk Diaries I will try and play at least one slab of vinyl that is relevant to the day of broadcast.
Next show is on April 4, the SoundArt studios are being refurbished over Easter so this programme will be pre-recorded at Dave's house..so it's no use phoning in requests and death threats...save that for normal service on April18.
The programme is uploaded onto Mixcloud. I have a new 'pooter and cannot get into my Mixcloud "Muhsteve" account so have put this in the "Muhmur" account, hopefully all will sort its self out.
Playlist: