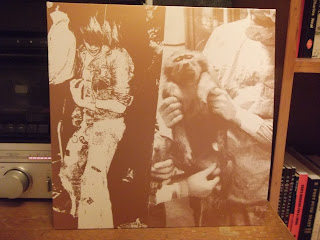 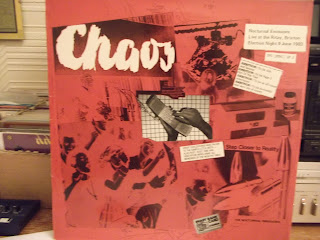 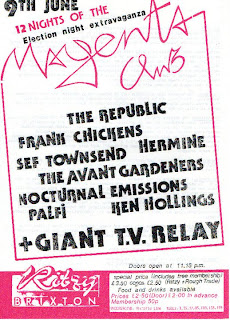 The  last few days (great band) have been dedicated to the work of Nigel Ayers here at Hartop Towers. The live performance in Polruan where I managed to pick up a copy of the Nigel Ayers, John Everall, Mick Harris collaboration CD "Mesmeric Enabling Device" on Solielmoon and now the 12"EP "Accumulator" that comes with a bonus CDR of Nocturnal Emissions live at the Brixton Ritzy 1983. Beautiful stuff. The 12"EP is the first piece of "new" Emissions vinyl in quite a few years. The three tracks being recorded in 1982.
Interview with Nigel Ayers:
MM: (me) Why have you released something from so many years ago?
NA: The guys at the label asked me if I had anything unreleased from that period and I gave them those   tracks.
Fair enough. I think the tracks come from around the time of "Drowning In A Sea Of Bliss". The sound is raw. Side A is the 8 or so minute track "Accumulator 2". It is the sound of a Roland sequencer. A programmed pattern of bass pulse and throbbing beat with snare snaps and hand claps woven in. Skeletal spine. Work In Progress and sounding very much of its time. That's the technology of 1982. There were others experimenting with the same sound / equipment at this time. Chris & Cosey with their Conspiracy International project and S.P.K. with tracks around their SeppKu period. Nigel had a side project around this time called Spanner Thru' Ma Beatbox, this 12" reminds me of that project (although I haven't heard the LP in twenty odd years). Side two features a "dub version" of "Accumulator 2" called "Accumulator 1". Very (early) On-U Sound with added drums rolling over the rhythm and lots of reverb / echo FX. "So Darn' Hot"  is a slow atmospheric instrumental piece with an underlying sense of menace. Again, sounds like work in progress, I am lead to believe  that parts of this track are on the "Duty Experiments" cassette that Solielmoon released in 1988.
The 12" is on We Can Elude Control a London based label of whom I know nowt about. There is a free CDR that comes with the record, a piece of "Thatcher Memerobilia". Nocturnal Emissions live on Election Night 1983. This has already been released as a vinyl LP back in 1983, perhaps the greatest live LP ever released. Tracks from the "Viral Shedding" era with classics such as "No Seperation" and "Smash With Love" it's a great document to how live and powerful the Emissions were back then. Essential.
The 12" is available from Boomkat, it is also available as an Mp3 download from the same people.

Pictures.
1: "Accumulator" 12" Sleeve.
2: "Chaos" LP (Cause For Concern Records) 1983.
3: Flyer for the Brixton Ritzy Election Night gig. (Whatever happened to The Avant Gardeners)?