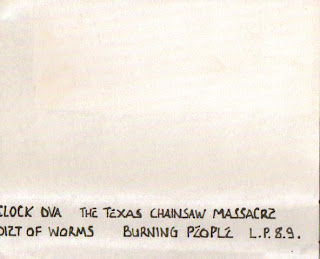 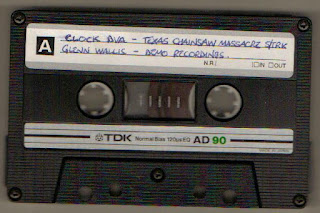 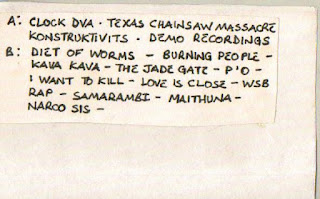 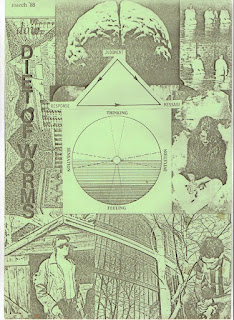 This is one of the oldest tapes I have. It is a curious little tape that doesn't get played very often but still remains a treasured item. I must have got the cassette from Dave Uden - the Diet Of Worms is a giveaway clue - but where he came across the DVA stuff and Konstruktivists Demos remains a mystery....John Everall??, Simon French?? Anyway..it's a (rarely played) classic.
The tape is high in tape hiss...no Dolby NR can save this beast but I think Side A is fifth or sixth generation copy. Clock DVA "The Texas Chainsaw Massacre" (or "The Texas Chainsaw Massacre Alternative Soundtrack") is a strange listen. It all begins with a voice from the trailer describing the horrors of the film before violins are scratched and cymbals smashed through a variety of echo and reverb effects...and the old WEM Copycat no doubt. The DVA material lasts for just over half an hour and the "music" plays very much in the background as tape snippets from the radio (played in the van ... if memory serves) and dialogue from film...the chases through the house and the describing of the slaughterhouse are high "in the mix". The sound, the alternative soundtrack is almost like a fog, a cloud of echo amongst the buzzing chainsaws and slamming doors.
The Konstruktivists Demo tracks are of the same (tape hissy) quality. 4 tracks. "Free Form Fetish" with Adi Newton on vocals, and a different version to that on the recent DVA Vinyl On Demand collection and the "Psykho Genetika" album is followed by a novelty rendition of The Crystals classic "Then He Kissed Me" ... altered to "Then He Shot Me". Two very short synth noodle pieces finish off the Side A.
Side B is a curious beast too. History lesson. Diet Of Worms were formed by myself and Dave Uden in January 1983 after the demise of Wallpaper Paris (mentioned elsewhere on this blog). We did take our name from the This Heat track! I left being a full time member a few months later and Andrejz K and his partner Sarah became full time "Worms". I did record the odd track with Dave and Andrejz afterwards....I appear on one track that appears on the only "official" Diet Of Worms cassette "The Burden Of Proof"...and sometimes tracks Dave and I did for "fun" ended up credited as Diet Of Worms. "Burning People" is almost unlistenable. It is all Roland SH101 and Drumatix lead pieces. I find it hard to believe it was recorded in 1989 (as mentioned on the sleeve) because Dave was doing this kind of stuff in 1986/87 ... but I could be wrong. Back in 1986 I did record the tracks "I Want To Kill (Again)" and "W.S.B. Is Very Clever" with Dave and versions appear here...but whether or not I am on them .... well, let's just say I hope not! The "W.S.B. Rap" is a sequencer mixed with Burroughs reading "Place Of Dead Roads".
I remember a quote from Chris Carter saying that Chris & Cosey "invented" Acid House back in the mid 1980's ... well it is obvious that Chris had never heard of Diet Of Worms and their repetitive looping rhythms and sequencer patterns. Pre 808 State and their "New Build" album too.
It is not for me to tell the Diet Of Worms "story" as I was only involved for a short span of their time.