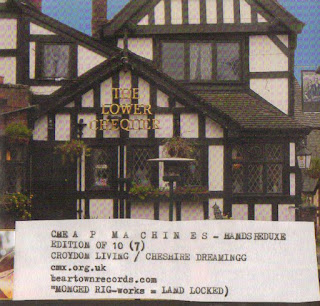 I thought I had fallen out of favour with the good folk of Beartown Records after I mentioned that one of their latest releases (by Lunn Poly) wasn't really my cup of tea...but I paid up for their latest release by Cheapmachines and with it came a jiffy bag full of joy...so thanks Chris, thanks Dave...a pint will be on the table next time we meet.
So, I have a copy of the latest release by Cheapmachines, limited to 10 ... I am certain it will be available in larger editions or download soon...it must, like the BBBlood cassette "Destroy, Shatter, Stun, Intoxicate" that came out on Void Seance in an edition of 10 and later ended up on the Baron's website for download, it simply must.
Cheapmachines "Hands Redux" is a remix/re sculpture of an earlier Beartown Records release by a project called Shit Hands. I must admit to liking the name Shit Hands, whether or not it is a play on the William Bennett project Cut Hands doesn't matter..it's a good name. When William Bennett (have you seen his lecturing videos by the way? Confidence in public speaking to a crowd of business students in Dusseldorf - weird stuff...anyway, I digress) came out with the name Cut Hands I have to keep saying it in the voice of "Shake Hands" from "Boys From The Blackstuff"...too tempting...stick out the right hand and go "Cut Hands" in a scouse growl...I'm digressing again, but I now do the same with Shit Hands. As far as I know Shit Hands is Chris Bostock of Beartown Records and the man behind Lunn Poly and Phil Julian (aka Cheapmachines) has used the one and only Shit Hands release, the cassette "What Did My Toy Boy Really Think Of Me?" as source material for this 25 minute odyssey.

It starts off loud and live - a voice shouts "Shit Hands", and we are off...noise like a live Cheapmachines performance, cold, angular and very apple mac before silence. After two and half minutes the sound dies and leaves a glistening silence...it becomes quite eerie with the sound of insects, crickets, grasshoppers swimming in the long grass on a summer evening. This sound shifts into irritation, like a sound crawling beneath the skin, under the surface..an occult noise. Effective. Disturbing. Disturbance broken by zither. Half way through the disc and the sound is of random sequencers making noises like animated Eastern European aliens duetting with echoes from the walls of an insane asylum. It is bedlam which leads to five or six (great band) minutes of Boyd Rice noise-wall. "Back of the net". The noise finally oscillates before implosion and collapse ending in dead noise. If only someone had shouted "Shit Hands" at the finale, it would have made ten out of ten (without grounds).....

Excellent release that deserves (and I am certain will get) a larger audience than ten. I want to hear the original Shit Hands cassette now but I fear that is long gone. I have worked with Phil in the past, he has manipulated and re-constructed the sound of Dieter Muh and taken it to places that I never would have dared nor imagined, Chris is probably sat at home now thinking "Jesus Christ I've got a beast in my hands" ... but that's another story.

The CDr has a subtitle of "Croydon Living/Cheshire Dreaming" and comes with a pamphlet explaining the joys and tourist traps of Cheshire, although I always thought Congleton was in Derbyshire...
Buy this release and if you get a sorry sold out reply - demand a repress!!!!
Posted by Steve at 19:41