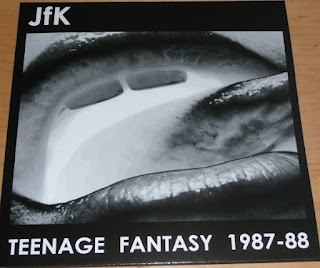 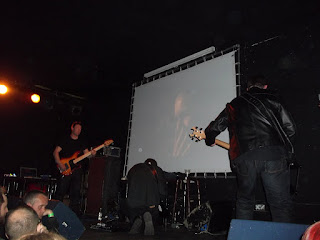 This spring saw a new brace of vinyl releases from UK's finest Harbinger Sound Recordings. Both releases are double albums (wow, it's just like the mid-seventies..man) and I am left with the feeling that neither of them need to be. Firstly I listened to the eponymous release by Death Magazine 52. I am familiar with the name D Mag 52. I never knew it stood for Death Magazine, but D Mag 52 were a short lived noise band from the West Midlands active during the mid 1980's ... or so I thought. There is a famous picture of Phil Best putting a black marker line through their name that is on a poster when they were supporting Whitehouse in Birmingham. 1984-I think....but D Mag 52 never released anything. No tape no nowt and then two former members Sean Dower and Mike Dando went on to be famous. Sean as an installation artist and member of the Bow Gamelan Orchestra and Mike as Con-Dom.
Anyway, Steve Underwood of Harbinger Sound got hold of some D Mag 52 tapes and has released them, on a double album. One album is studio, posh and proper studio recordings. Polished recordings...no tape hiss and digital remastering or baking of TDK D90's...no, proper studio stuff and it sounds like a cross between A Certain Ratio (circa their Stevie Wonder phase), Cabaret Voltaire (circa their Microphonies stage), and 23 Skidoo..or (to me) 23 Skidoo if Mark King was in the band, not Fritz Haaman. The other album is of live recordings. Three gigs from 1983. Quality of these recordings are not too clever...the set from The Equinox Event is mostly audience chatter.... I think that D Mag 52 should have remained a cult name from the past.

The other half of the brace is the double album "Teenage Fantasy 1987-88" by JfK. This release comprises of two old tapes put out by Broken Flag and some unreleased tracks and compilation appearances. I never knew Steve had this release planned, first I knew was Steve selling copies at the Broken Flag Festival in London last month. I know very little about JfK, I bought the 7" "Sexodus" back in 1992 because it was on Fourth Dimension...and back in the early 1990's they were knocking out some decent stuff (Cosmonauts Hail Satan, Rake, Null). I liked the single, fitted into what I used to call "The Glitter Band" sound ~ Skullflower's "Third Gatekeeper" being prime exponent of and Exhibit A m'lud. I then bought a split cassette with Grey Wolves on Artaman Tapes, but that was just unlistenable lo-fi noise and so lost my interest in JfK.
JfK is the project of Anthony Di Franco, since the creation of JfK in 1987 he has also been in Skullflower, Ramleh, Putrefier and recorded as AX, Novatron and Ethnic Acid. His first release is Side A of this album. "Il Parch Preserve" was put out by Broken Flag in 1987. 1987 is roughly the time that I stopped listening to Broken Flag cassettes. Total "Hard & Low" I think ended my affair back then. The three tracks that make up Side A sound dated, non-directional and have a bloody annoying Yamaha DX drum machine that is played so badly that the needle doesn't last long on any of the tracks. Sides B & C comprise of the 1988 Broken Flag cassette "Woelf". Sides B & C are excellent and no annoying Yamaha DX...well if there is it is played by someone who has found a sense of rhythm. "Follow Me 1" sounds like a slice of Zero Kama, or Ain Soph or Korpses Katatonik, dark and occult. "Follow Me 2" is Psychic TV's "Terminus" speeded up, and the side finishes with "Sunset Smiles" where JfK slip into industrial sludge terrain, the aforementioned sound of "Sexodus" and the likes of Skullflower, Husk, Ramleh, Headbutt, Dying Earth Europe et al. All the sounds, the guitars, the vocals, the Yamaha DX drum machine are all swirling around and buried deep in (space) echo and reverb.
The final side is comprised of three unreleased pieces and a track from the 1988 compilation cassette "Inna Inner Amen" released by Sound Of Pig. "Intro" is OK. Punchy tape splicing, clever technique in an age before the digital sampler. "Nipple Ain-Tow" sounds like a Gary Clail out-take. And reminds me of Roxette Ramleh at the Broken Flag Festival where timing and tuning didn't matter. "Feel The Weight" (a great unused Skullflower title) is a building wall of noise. "Come Thursday/Come Monday" is OK...it made me dig out my Come "Come Sunday" 7" and I enjoyed that 7" to the whole of Side D.

I reckon Harbinger Sound should have stuck to putting out "Woelf" as a single LP, like they have done with the Kleistwahr re-issues, but I am certain there are enough BF nuts and collectors out there to make the double album worthwhile. (That's Rock N' Roll...Part One).