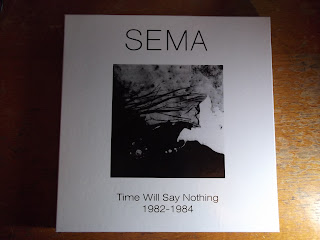 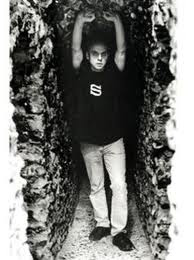 Just spent a pleasant while listening to one of this months releases from the German label Vinyl On Demand: "Time Will Say Nothing 1982-1984" by Sema. I heard about the plans to release this four album box set a few weeks ago...and I have been counting the days for it to hit my turntable.
The box set includes four albums from the early 1980's as well as some bonus tracks tacked on to the end of "Extract From Rosa Silber" and "Three Seasons Only". The albums tell the story of Sema from early experimentalism a la Nurse With Wound on 1982'2 "Notes From Underground" through to the neo-classical piano and acoustic 12 string guitar on 1984's "Three Seasons Only".

It is hard to describe this box set, but as soon as the needle hits the record on track one side one of album one "Notes From Underground" I am back in 1982. It's like the real sound of the time. There are films about - "Control" comes to mind, and TV series like "Life On Mars"/"Ashes To Ashes" that depict life in UK in the late 1970's/early 1980's, but they can never tell or show what it was really like because they are modern day actors in wigs and corduroy driving Ford Cortinas, the same as when I hear a sound from a "modern" project / artist (whatever) and I think that reminds me of early Nekrophile releases or Throbbing Gristle with a touch of Eric Random...but it doesn't take me back...it is not the real deal, but playing these four Sema albums I am back there with a Because you are here...I am at home moment. Pre digital computer madness, pure experimentalism, dadaist noise. Beautiful. It is the sound of me, early twenties listening to what I wanted to hear in the quiet of my room (great song).
The records also conjure up two old friends who were really "into" Sema and the works of Robert Haigh. Sean Rorke and Peter Elliott. I used to have a cassette, unmarked, sleeve lost in the history of time that I always thought was Nurse With Wound, this weekend I discovered it was "Extract From Rosa Silber" LP by Sema.
Sema is acoustic, acoustic piano, acoustic clarinet, acoustic guitars and voices. There is masterful tape editing, crashing, creeping and crawling around in the sound...surprisingly (in parts) easy listening. The final album "Three Seasons Only" has a 1930's Berlin Cafe feel to it with meandering piano keys and guitars. Also included in the set are three pieces from various compilations and a track from the "Best Of Robert Haigh" cassette that United Diaries put out in 1987.

Just in case....Sema is the solo project of Robert Haigh, who after releasing four albums on his own Le Rey Records label recorded under his own name for releases on United Diaries, Dom and L.A.Y.L.A.H. Antirecords. Pre Sema Robert was a member of The Truth Club(with This Heat member Trefor Goronwy) and Fote. Ten or so years after his last release as Robert Haigh he became Omni Trio, a Drum n' Bass type thing that disgusted me at the time! Listen to "The Over Yellow" on the compilation "Ohrensausen" for early hints that Robert was going to move into this area.
The last I heard of Robert (post Omni Trio) was that he was running a secondhand record shop in Hertfordshire...then I heard he had moved down to the South-West of the UK...near me...if this is so, I wonder if he wants to play live again????

Anyway. The box set is beautifully packaged with artwork by Paul Takahashi. Limited to 500 and completely necessary. Buy now.
Posted by Steve at 16:43