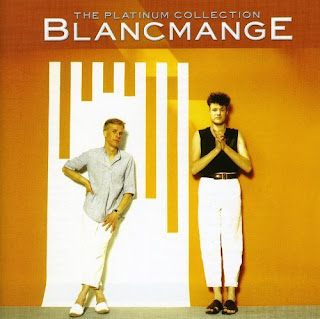 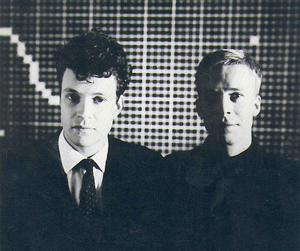 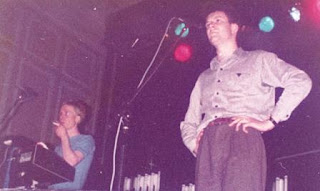 It is a weekend full of Blancmange here at Hartop Towers, I know I should be "rehearsing" for the upcoming live gigs in Nottingham & Stockholm, but I've just bought the excellent CD "Platinum Collection" by Blancmange and I can't stop playing it...and the kids love it too! The CD set me back the princely sum of £2.99 and is (probably) available at all good supermarkets.

1982. Bizarre year (for me) 1982. It was the year I shared a flat with Drew Cormack, the year I gave up milk and sugar after overdosing on paracetamol tablets and the year I became friends with Tim Bayes. It was also the year I started buying records by Blancmange. There was a record shop in Lincoln called "Prides". Sanctuary Records (the best record shop in the world) had closed, as had Tracks and Rod's Records and Lincoln was left with "Prides" - the only place to buy punk/new wave stuff in Lincoln, so 1982...the year I discovered "Selectadisc" in Nottingham (not true, I bought The Pop Group "We Are All Prostitutes" from there in 1979, so let's say 1982..the year I became a regular customer of "Selectadisc" in Nottingham). "Prides" had come in to the area from Newark and had incredibly unfriendly and unknowledgable staff, it was no Sanctuary. But what "Prides" did have was a bargain singles box, either stuff that was floating around the arse end of the top 100 or singles that were cheap because the record companies wanted them in the charts. So I found myself buying 7" singles by the likes of Blancmange, Thomas Dolby (he was in The Fallout Club), Yazoo, The Thompson Twins, Tears For Fears and Our Daughters Wedding. Blancmange stood out, excellent synth rhythms and catchy (surreal) lyrics...good stuff. I never went as far as buying the first album - it would never have fitted in with the Throbbing Gristle, SPK, Pere Ubu, Public Image Limited records I was carrying around at the time...but a poppy 7" could always be hidden at the back of the pile (I still have a copy of Falco's "Rock Me Amadeus" hidden in a desk drawer for those special "solo" occasions), or disposed of because it was bought for 49 pence.

Blancmange began life as a three-piece in 1979, before slimming down in to a duo and self-releasing the 7" EP "Irene & Mavis". I have never heard this EP, but I remember at the time Blancmange being a kind of electro-experimental group to be mentioned in the same breath as The Human League, Lemon Kittens and Cabaret Voltaire. Then the new romantics and futurists moved in and Blancmange appeared on Some Bizarre Records and I sort of lost intrigue, but the name gave me enough interest to buy their bargain bin vinyl singles.
I also had a dislike for Richard Strange around this time too. I saw him live and thought he was (musically) a joke with his self-publicizing "phenomenal rise" and "International language" - now of course I love the stuff and declare the guy some kind of genius!
I have seen Blancmange live a couple of times. Early doors they played live in Lincoln. Live at Lyndsey's Disco Bar (I saw The Cigarettes there). Unfortunately I was barred from the venue for either pogoing to PigBag on the dance floor or worrying ladies with my hands...it wasn't explained to me (or Dave who was with me on that particular evening) at the time, but I was never allowed back in unlike The Cornhill Vaults, a pub in Lincoln I have been barred from twice! The first time I saw Blancmange was at Futurama 4 - Deeside, North Wales in 1982. They headlined on the first night - I don't think they were supposed to, I think that was New Order's role but Blancmange showed up late! It was strange (as I remember) because after New Order - a band that at the time I had gone off...a lot - most people went to their tents or to the main hall where we were all kipping, so Blancmange performed to a very thin audience but bloody hell...they were good and made me proud that I had a single or two by them. They had some backing films of graph patterns and mathematical equations...it was excellent stuff, and (for me) along with Punching Holes and The Wake were the hit of the festival. A couple of years later I was living in Manchester and Blancmange were playing the Apollo. Probably called the 02 or something similar now, but in 1984 it was the Ardwick Apollo. I probably wouldn't have gone if it weren't for the fact that Portion Control were supporting. It is because it was 1984 and I was living in Manchester that I don't remember much about the gig, Blancmange had a full "Indian style" back-line...lots of tabla players sat on cushions...but I was there to see Portion Control - whom I'd seen live before and was glad to see that they still used their slideshow of death, destruction and pornography as a backdrop despite the audience being (mainly) pre teen girls and their parents. "We Are Control". I don't think it was long after this that Blancmange folded.

It was whilst trawling the net for Bill Nelson information I came across a clip of Blancmange live at The Hacienda in Manchester. Cherry Red TV...recommended website. It was that footage that put Blancmange back in to my consciousness. The superb lyrics of "Living On The Ceiling" and "God's Kitchen", the sitar and tablas around the hard (yes hard!) electronic rhythms. Classic. I once sat at a table opposite Stephen Luscombe in an Indian restaurant in Rusholme, Manchester (late 1980's)....should have got my napkin signed! And now I find Blancmange have reformed - like all 1980's synth groups. If they play Exeter I might go and have a look. The CD now sits unashamedly alongside Blasterkorps and Bodychoke.

The Blancmange weekend continues.
Posted by Steve at 12:37