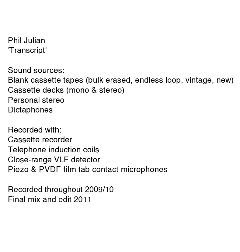 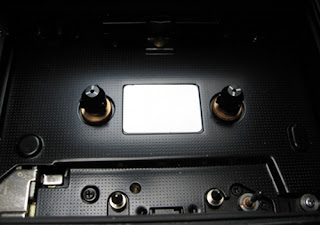 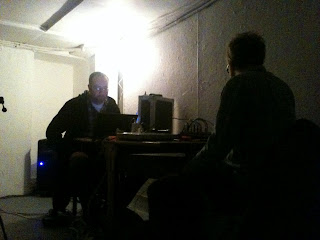 Have just spent a pleasant while listening to the latest release from Phil Julian. And I mean that too, "Transcript" (a C30 tape on the American Obsolete Units label) has not been out of my tape player since it arrived on Friday. OK, I have spun a little John Wiese stuff - preparing for his live set in Nottingham in a couple of weeks and after hearing something about a European Genocidal Anniversary (E.G.A) happening in the Balkans on the radio the other day I thought I would give the Grunt album "Europe After Storm" a play...Mikko's concept album on the "Balkan Crisis". Great album. (Very British to call "genocide" some sort of "crisis").
But back to "Transcript". In the past I have moaned about the lack of information on some small run releases, no need here, the sleeve is a list of credits - of sound sources used, of recording devices used and of timing + personnel. All that is needed to keep an old fart like me happy! The tape features 4 soundscapes using the cassette (used & blank) and the cassette player as "instruments". Side A starts off with a lovely warm hiss...the comforting tape hiss I know and love. Minutiae brought to the fore, the sound builds in to a sound not too dis-similar to This Heat's "Horizontal Hold". Distortion and interference. The sound builds to a climax before leaving on a rhythmic loop. The second piece sounds like the internal workings of cassette machine mic'ed up, lots of fast spooling and pause button noises. Side B carries on in this vein, more experimental than entertainment. The sound becomes more non-cognitive dipping in to the realm of Dada and/or Musique Concret. The works of Small Cruel Party, Mark Durgan and M:S:B: R are all invoked here. Spooling sounds, cutting staccato, magnetic reverberations. Interesting stuff, but I have found myself returning to Side A more than Side B.

A fascinating artefact from an artist I am begining to enjoy more and more with each release. This tape is limited to 100 copies and available from www.obsoleteunits.com. $7 postage paid. Bargain!