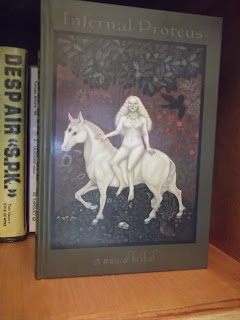 Have just spent a pleasant while listening to the four CD compilation album "Infernal Proteus" on the Ajna Offensive label. OK, so it is ten years old, but I knew nothing about the release until I read a review (of sorts) recently on the excellent Thee Intergalatik Beard Dropout blog and even if the album is ten years old, alot of the bands/projects involved are new to me.
The four CD's are housed in a book, a hardback book full of colour plates depicting different plants and herbs.
The concept of the album is one of the power of plants, their use in everyday life, for food, clothing, magickal purpose, healing properties etc and each of the 40 projects involved are given a plant/herb to represent. The book is a beautiful item - the sounds accompany the book beautifully, I am mightily impressed with this release.

Rather than go through the album track by track let me just say that the album features a broad scope of musical genre from some of the best in their field.
The first CD is mainly neofolk and neo-classical music. It has a very medieval feel to it with excellent tracks from Allerseelen, Alio Die, In Gowan Ring and Endvra. New names to me and bands with sounds worth discovering are Alraune and Circe. The second CD has a more drone, dark ambient feel to it, and I was thinking...ahh they have split the CD's in to genres...very good. Apoptose start the CD with the excellent "Eichensiechtum". I saw Apoptose live in their native Leipzig in 2006, superb sound. Ultra follow with "Yohimbe". Ultra's participation was a major factor in buying this album. From the first time I heard "Spray/Death/Ultra" album twenty years ago I have liked Ultra. A beautiful drone from Jonathan Coleclough & Tim Hill follows leading in to a fairly dark and eerie number from Troum ( another leading factor in to the purchase of this beauty). Inade end the CD with one of their best tracks, "Dues Aderit". A great Teutonic voice over stretched electrics. A joy.
CD three begins with The Red King and "Opium Poppy". The Red King sound like Laibach. Now the idea of each CD representing a different genre hits the fan as what follows is Gothic darkwave and musique concret along with neo-classical tracks. "Her Inaccessible Reaches" by MNortham sticks out, a great irritable sound - insectual. Mania start CD number 4 with their Whitehouse sounding power electronics, a strange choice for the project but the former Taint man keeps it short and simple. Igor 18 follows - a very weak piece that doesn't really know what it wants to be, and a shame because every track up until now has been exemplary. Who are Igor 18? Aube really starts CD#4 with the excellent minimal shuffle of "Ki-Ku". I love Aube, like Ultra, Troum, and Inade the fact that Aube is on here made the album a must have.

The most enjoyable CD is the first with its' great poetry and song. It does border on folk, but then sometimes I want to listen to some good (sing-a-long) folk tunes. I bought an Albion Dance Band album in 1976 y'know! CD#2 and the dark ambient/drone pieces is a great listen too, but CD's #3&#4 are a little "all over the shop" for my liking....but there are some great sounds held within which make the release a must.
Posted by Steve at 20:06