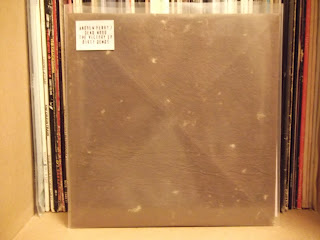 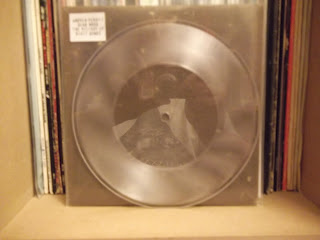 I was trawling around the internet the other day and I came across the name Andrew Perry. He was doing (or is doing) a Mainland European tour with Sindre Bjerga and that brought back the memory of the day I met Andrew...we were both playing the Transient Constellations All-Dayer at the Windmill in Brixton last November. A tall chap with a chain smokers beard..we chatted about this and that and probably the weather. Andrew was first act on and I was keen to hear his stuff but his stage time coincided with me meeting Messrs. Underwood & Kane in a Brixton boozer. (Sounds like a bad Channel 5 cop show "Underwood & Kane")! I had to meet the guys as one of them was housing me for the evening and arrangements had to be made.
Anyway, my trawl also brought about the fact that Andrew had released a split single with Dead Wood. Dead Wood were one of my favourite aural discoveries from last year with their split 3" CDr with Phantom Heron Seas and a record pressed on a plate (again with Phantom Heron Seas). The plate release was on Dirty Demos (the label with the terrible name and even worse logo but a great sound) and so was this single.
"The Victory EP" is a ten minute soundscape lathe cut on to transparent vinyl. It is hard to tell which side is which artist - there is no information. (Always a downside with me....a little bit of paper with a hint of track title, or instrumentation wouldn't have been too much...would it?). There is the inevitable lathe cut snap crackle and pop to the sound, one side sounds like an electric guitar hum with someone picking up and putting down the said guitar, whilst the other side sounds like someone walking round a room with a synthesizer droning and a contact mic nestling in a cardiganed armpit. It is an interesting single, one that I imagine will alter on each listening, it has also whetted my appetite for more Dead Wood and to discover the sound of Andrew Perry.
The single was released last December and limited to only 25 copies, it comes wrapped in thick "Japanese style" paper. Go to www.dirtydemos.co.uk and see if there are any copies left.