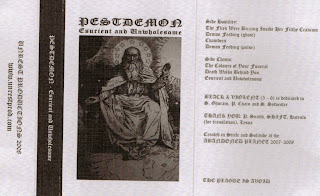 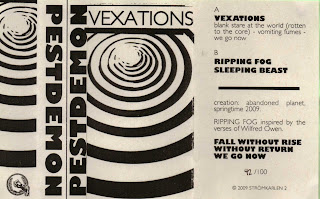 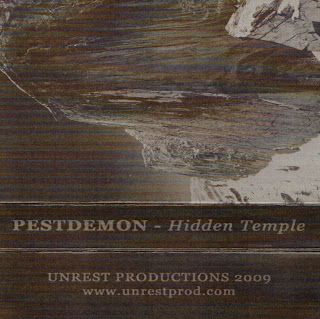 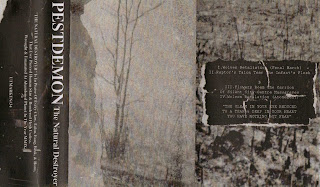 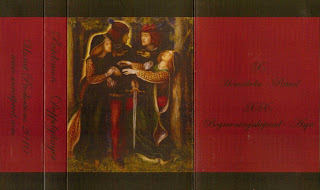 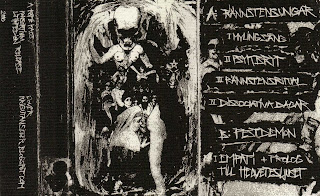 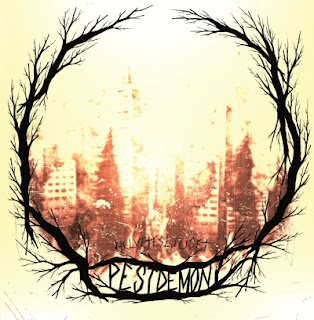 The week started with the purchase of the latest LP by Pestdemon. "Helvetesljuset" on UK label Unrest Productions. (I think a rough translation would be " Hell Of Light", but don't quote me). So knowing I had a few days before it arrived in the post I set about reacquainting myself with the sound of Pestdemon via the half a dozen tapes I have bought over the past three years.
It was the name that intrigued me That, and the first cassette was released by a UK label therefore being easy to get hold of. "Esurient & Unwholesome" was released in 2008 by Unrest Productions. Limited to 100 copies. The sound is visceral.There's gristle in the sound. Side one is full of swirling electronics and tinkling Tibetan percussion making a sound of evil amongst the crawling chaos, side two has storm interference on a shortwave radio. The overall sound is of power electronics from the 1990's. Think Cold Meat Industry and Art Konkret. It came across (at the time) as a stunning debut and three years later is still a great listen. "Vexations" followed in the following year. A 48 minute cassette released by the Swedish Stromkarlen label. Stromkarlen is the label set up by Ex-Segerhuva operator Jonas Kellagher. Again the cassette is limited to 100 copies. The tape carries on from where "Esurient" left off with the sound of layered static noise, dropping, building, looping to great effect. HNW I believe it is called. There are hidden vocals that rise and have the trademark black/doom metal grunt but here it doesn't detract...more uplifts. Excellent cassette release. In the same year came "Hidden Temple", a 30 minute cassette (again) on the Unrest Productions label. "Hidden Temple" has a cavernous decaying sound, the electronics throb, grind and oscillate before being looped and layered. Powerful material. Side two is dark. Very dark. Swirling looped electronic noise that has a church choir hiding in the background. Doom Electronics, or Doom Harsh Noise Wall. (DHNW). Think Content Nullity, think Duncan Harrison and if you're old enough think "Lustmordekay".
2010 saw the release of "Natural Destroyer" on the Swedish Utmarken label. This cassette is limited to 50 copies. "Natural Destroyer" is not an immediate favourite, the construction of noise here is lacking. There are no hooks, no loops just a relentless screaming wall of formless noise and not my cup of tea. Four tracks all with a lupined theme. It was at this point that I was thinking "is Pestdemon a spent force"? Had I heard his better material? (I am at this point thinking that the project Pestdemon is the work of one man, probably Swedish, otherwise wouldn't it be The Pestdemons)? The fifth Pestdemon cassette (fifth to my knowledge anyway) was another release by Unrest Productions and this time with a full colour sleeve so I bought a copy. Unrest Productions is not only a fine UK label and distributor but Martin does seem to put the purchase in the next days post. Faultless. "Doppelganger" is another 30 minute cassette released in the strangely limited edition of 141. Side One is of rolling distortion hiding radio broadcasts and spoken word tapes. Side Two begins with piano. Looped piano. Melancholic and funereal Crumbling electronics fluctuate around the sound before becoming continuous and addictive - then the piano returns with a lamenting operatic vocal before the sound becomes full circle. Excellent cassette and it brought me back in to the faith of Pestdemon. Next release was the split cassette with Rannstensungar on the Swedish labels Konsortium Lithopedium and Kafe Kaos - both being new labels on me. Unfortunately my cassette doesn't play, there were labels glued over the spindle holes. I tried to clear the holes but this made the tape jam and jar whilst playing and almost fucking up my tape machine. The cassette is limited to 50 copies and it would be interesting to know if any other folk have had the same problem.
"Helvetesljuset" is a great LP. The sound is low key, and resembling the release "Hidden Temple". It has the sound of shuffling and scraping around an old industrial site or darkplace to quote Garth Merenghi. Again it brought to mind the work of Duncan Harrison...and that in my book is a major plus.
I shall continue to listen to and seek out the releases of Pestdemon.