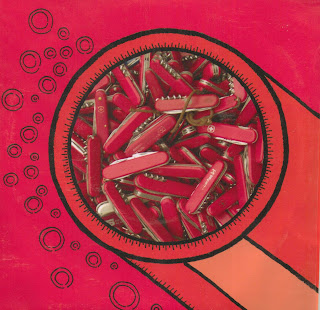 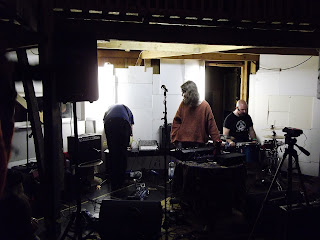 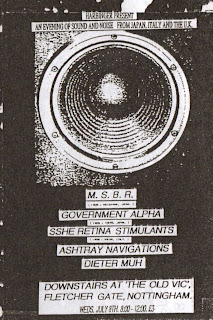 Just spent a pleasant while listening to the latest single by Ashtray Navigations. "Three Rockets Thicken" on Trensmat Records. Earlier in the month I saw the Ashtrays (as we call them at Hartop Towers) live at the Wysing Festival in Cambridgeshire and they were the hit of the day for me (besides Preslav Literary School and Astral Social Club and Disinformation), OK they were the surprise of the day for me. I liked the sound so much I bought this EP there and then.
13 years ago I played on the same bill as the Ashtrays in Nottingham, and that night had tainted my ears somewhat to their sound. They seemed to play for ever that night, a sort of improv. of zither and acoustic guitar. I got hold of the album "Four Raga Moods" but it did nothing for me. That is why, on this night in Cambridgeshire they hit me between the eyes with a great live sound.

The EP has three tracks, three short jams. Not extracts from longer pieces (something that I dislike) but three pieces recorded specifically for this 7" release. They have beginnings and ends.
"Monkey Music/Throw Money at the Monkeys" has an awakening of guitar and synthesizers. The sound is not too far from Section 25 and their "Key Of Dreams" LP. The synthesizer rush blossoms into....krautrock, moments later tablas work their way around the drifting guitar. It is beautifully uplifting. "Dinshan F Ghadali" is a short piece of floating guitars and keyboard drone. "Rocket Dust Slipping Out Of Your Mouth Some Afternoon" is a fantastic instrumental piece. It is 1970's prog rock sped up a few revolutions. The works of Greenslade came to mind whilst listening to this beauty. (is that a bad thing)?
How long have the Ashtrays sounded like this? Is their a full album of this material? Can anyone out there help?

Buy from www.trensmat.com or http://ashtraynavigations.wordpress.com you will not regret it.