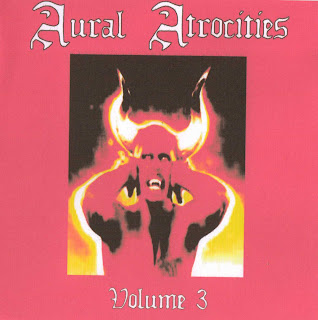 I have had this album, this CDr, for a couple of years or more now and I could not remember ever playing it, so I pulled it from the racks and gave it my ears, and time...
The CDr was in a package from Duncan Harrison a couple of years back, so I must have given his contribution a listen, but the rest was all new. The album looks like one of those compilations made by someone requesting material on a forum board, and running off copies on demand. Apart from Duncan the only other artists (using term loosely here) I have heard of are Cracked Dome & Splinter Vs Stalin and that is because they appear on certain noise/experimental sound forum boards. The rest read like a line up at a MySpace Convention for no-hopers. The album was released in 2009 from recordings made between 2006 & 2009 and is on the 412 Recordings label.
The album starts with Gas Chamber and "Deflower". The track has a male /female telephone conversation before blasting in to full on noise. There is no information on Gas Chamber. To me it sounds Japaneses so my guess is that he (it's always a he) is Canadian. Next up is Cracked Dome, within the message Cracked Dome = Blasphemator. "Blessed Coma" is a dark ambient piece, very atmospheric picturing empty vessels and shallow graves etc. The sound builds to a wide open noisesphere before decaying and disappearing. Interesting piece. Novasak provide circuit bending electronics. Not a favourite. Then in comes Slut Kull with "Cunt Kicker". The track actually starts off with an extract from the Derek & Clive "World's Greatest Cunt Kicker Inner" sketch. Unfuckingbelievable. Recorded in 2006 and sounding 20 years out of date - Comedy Power Electronics? (CPE). Stuntcock are from Ross-On-Wye. (Fred) West Country. Hawkwind style synth noodles through a trebly distorto-box. Next up is TGNM, a Japanese project operated by Yokota. Yokota describes his sound as brutal style harsh noise and who am I to disagree?
Duncan Harrison follows with the six minute piece "Honeying". Layering of choral singing and monastic chanting through a variety of echo chambers. It is sort of ambient and quite simply the best so far. It is hard to believe that there is a project called Chav Stabber but he (it is always a he) is up next with "Running With The Kull". Basically it is noise for noise sake rather like the next track by Beaten To A Pulp. "Beaten To A Fucking Pulp" starts with a distressed phone call to the police from a mother who has had her daughter kidnapped. This leads in to old school noise performed by a person called "Skippy" who I think has listened to too much Slogun. Back to CPE again. Splinter Vs Stalin is just bloody awful and proving the title of this compilation correct. The French project N.D.E.K. follow with (back to) noise for noise sake stuff.
The album finishes on a three minute track called "Choke On This!" by A Machine Called Orgasm. The sound of crunching looped electronics. It is quite a good track if it didn't keep stopping and starting with a sound of a female voice faking an orgasm.
The CDr is for sale on Discogs for a pound. Six minutes of Duncan Harrison for a pound? Your choice.