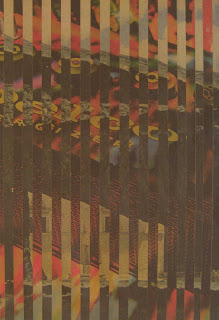 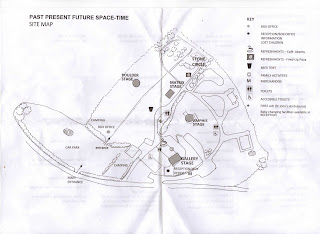 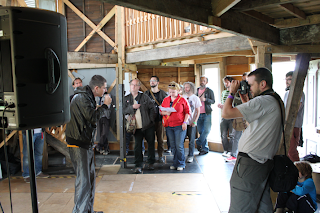 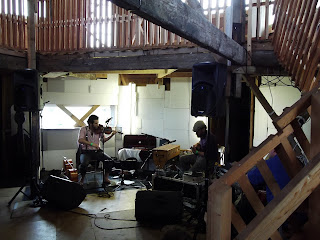 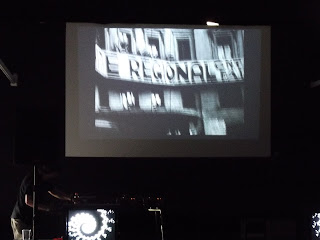 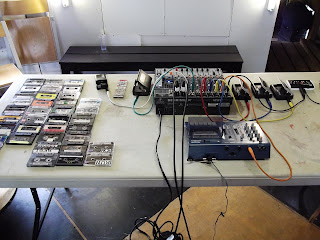 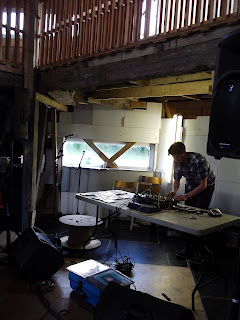 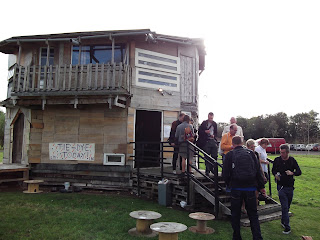 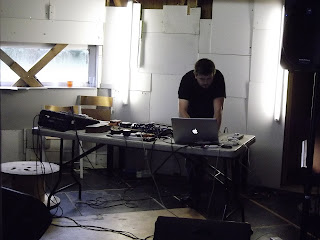 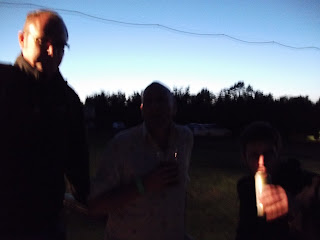 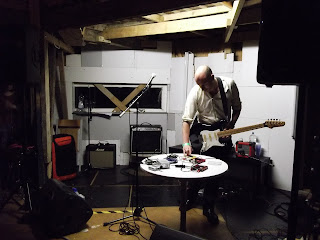 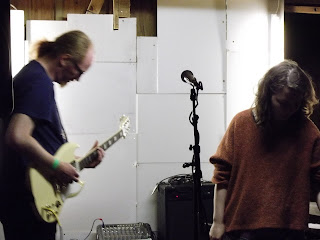 Have just spent a pleasant day at the "Past Present Future Space-Time Festival" in Bourn, Cambridgeshire. The lure for me to travel hundreds of miles to the event was a rare UK performance by Preslav Literary School and the attraction of hearing Astral Social Club loud!
Also along for the ride was my old friend Tim Bayes, recently back from Australia and now living in the wilds of Lincolnshire.
This was the second "Past Present Future Space-Time Festival" to take place at the Wysing Arts Centre so maybe still in its' teething stage, but for organisation and set up I think the festival will be going for a few years to come. There were some issues of "bad timing" vis-a-vis the running bill but I was told (and I am not a regular festival go-er, so I believe what I am told) that this is common place at events "like this". So there y'go.
The Festival began at Mid-Day.
The first few performers/bands on were local. Warm-Up acts. It all sounded a little like "Amateur Hour" whilst folk were milling about getting their bearings and bands were arriving and food stalls and the beer tent were setting up. (All tins of lager were £2).
The festival kicked off for real when The Dead Rat Orchestra played the Amphis Stage at 14:30. The Dead Rat Orchestra are a duo based in Madrid, although originally from Colchester. Their sound is of strings - violin and cello against a percussion of cow bells and the drone of harmonium. There were sections when the two members shouted at each other bringing into (my) mind Mieskuoro Huutajat, the Suomi shouting choir. Excellent stuff...fascinating to watch.
(The Amphis stage was a circular hut built out of reclaimed wood by artists Folke Kobberling annd Martin Kallwasser a unique venue).
With a bit of a lull it was time to catch up with Tim and sample the beer tents' wares and listen to The Invisible Polytechnic Orchestra soundcheck on the Boulder Stage. The Boulder Stage, an outdoor stage built to resemble a boulder sliced in half. The I.P.O. were performing a version of "In C" by Terry Riley. Sitting in a field in Cambridgeshire listen to the repetitive notes of clarinet and bassoon and the plucking of harp strings it was very relaxing.
Disinformation was performing indoors. This is where someone who understands the work of Joe Banks and Preslav Literary School was needed as their performance times clashed. I caught 10 minutes of Disinformation "Barcelona" before scurrying to the Amphis Hut to catch Preslav. For roughly half an hour Adam had me hooked in a trance as he built a soundscape out of prepared cassette loopings and spoken word. Magical. Preslav ran into I.P.O. time whose immense sound was ruined by some idiot in a battered transit van shouting sloguns through a megaphone at blistering volume - art...allegedly.
Simon Scott was interesting. The former Slowdive guitarist performed an ambient piece for laptop and guitar. A lovely raw live sound that fitted somewhere between The Durutti Column & The Cocteau Twins.
Not much happened after Simon's set. An awful noise came from the Matrix Stage. Devilman - a sound stuck in the early 1990's, but the festival crowd loved them. Whatever did happen to Gary Clail? Running times and artists were now overlapping so I am uncertain to whom I was watching, and after a few visits to the beer tent I didn't much care, reminiscing with Tim, Neil Campbell and Joe Banks about 1980's noise and its' place in 2011 was fun enough. Joe was Ashenden y'know.

Neil Campbell played at high speed and loud volume to create a miasmic whorl of noise, all kaos pads and distorted guitar riffs. The Amphis Stage became the Astral Social Club for 30 minutes. I have posted film of Neil live, so watch and enjoy. Ashtray Navigations quickly followed and were the great surprise of the day. I had played on the same bill as Ashtray back in 1998 and I found their sound (then) pretty hard to listen to but in the past 13 years they have changed somewhat in sound and personnel. This time last year I was in Paris watching Aethnor do their thing live and listening to Ashtray Navigations I was brought back to that night...but Ashtray's sound was a whole lot more accomplished, more directional and more bloody listenable. I am now going to have to catch up on Phil's output over the past ten years.
Ashtray Navigations closed the Amphis Stage so it was a slow wander to the Boulder Stage (via the beer tent) to listen to folk play dull and predictable laptop stuff.

The festival was well worth the trip because of Neil, Phil, Joe and Adam and The Dead Rat Orchestra and Simon Scott were a pleasant surprise. Like I mentioned earlier, the festival is still in a "teething stage".