COUM Transmissions At The Tate, 2011 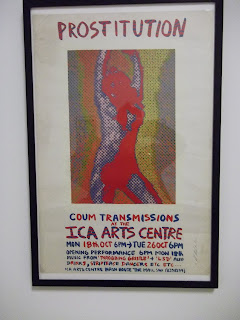 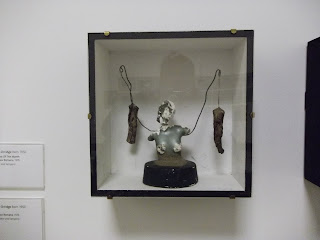 I have spent the last couple of weekends passing through and staying in London so I made time to see the small Coum Transmissions exhibition at Tate Britain.
Billed under "COUM Transmissions In Context:Performance 1969-1977" what there is on display is art from the "Prostitution" show at the ICA in 1977, plus handwritten notes by Genesis on the set-up. Posters from COUM performances, a collage of Cosey's work for adult magazines and photographs from COUM's European shows. Bloody fascinating stuff to see up close and in the flesh, so to speak. I have only seen the work of COUM Transmissions in books before. The exhibition is part of a larger piece featuring work of Gilbert & George, Cerith Wyn Evans and Bruce McLean amongst others and is there until 15 January 2012.
Strangely enough after being out of Hartop Towers for a few days I came back to a pile of mail including the latest COUM Transmissions vinyl release "Sugarmorphoses" on the Dais label. Yet to play.
Posted by Steve at 21:20