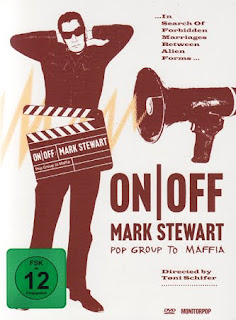 A couple of weeks ago I was asked by a fanzine to list my top ten "essential" releases. Not desert island discs but records/releases that had influenced my way of life. Politics, listening, approach, attitude etc. I thought about this a lot and if I had been asked for a top 11 then The Pop Group's "Y" LP would be in there.
I have just got a copy of the Mark Stewart documentary "On/Off" on DVD. It is an excellent film. Back in the 1970's The Pop Group were a marmite band, and I love marmite. Shameless sloganeering set against cold white funk, angular free form jazz and punk all rolled into one. Fantastic. "Y" still sounds fresh today. The CD re-issue includes the 7" "She Is Beyond Good And Evil" and its' B Side "3.38" (which always sounded like Wire's "Former Airline" to me - or was it the other way round?) and is well worth hunting out.
The film starts off with Mark at home with his mother in Portland, Dorset and Mark talking about his life in Bristol in the early 1970's. Mark is a very chatty chappy and therefore makes the film come alive. His two brothers are included talking about life in the Stewart household. Punk and The Cortinas stirred Mark and his friends into action. Gareth Sager, Dan Catsis and John Waddington all give their accounts against promo footage and live performance footage.
....back in 1997 I showed my friend (at the time) John Everall a video clip of The Pop Group live on Dutch TV, he in turn told Mark who then rang my parents' asking if I could "dub" a copy for him and mail it to his home in Dorset which I duly did. I got a lovely thank you postcard a few days later...this clip appears in the DVD, although the director could have sourced it from elsewhere it is exactly the same 17 second clip of "Rob A Bank" I mailed him.....
Nick Cave, Fritz Catlin and Janine Rainforth are all talking heads in this section but strangely not Simon Underwood or Dennis Bovell. Mark then talks about the artwork that accompanied the records and how after they had toured with "For How Much Longer Do We Tolerate Mass Murder" LP he got bored and left the band. Promo videos for second LP tracks I have never seen before litter this part of the film.
I never did see The Pop Group live, they played close by at the Porterhouse in Retford with The Good Missionaries and Linton Kwesi Johnson but for some reason I never went...I did see Pigbag at the Porterhouse a few years later though.
The film is 88 minutes long and the split between The Pop Group and his solo work is roughly 50/50. After The Pop Group split I followed all the immediate splinter groups. Pigbag, Maximum Joy, (my favourite) Rip Rig And Panic and Maffia. I think the first LP is the better of all Maffia albums, it captures the early 80's zeitgeist beautifully. The film has some great live footage of Maffia performing "Jerusalem" in Bristol.
There is no mention of Mark as part of New Age Steppers or his work with Gary Clail and The On-U Sound System.
Enter Mark's second stage as performer and enter LeBlanc, Wimbish and McDonald. The film keeps up the energy with an enthusiastic Mark and Adrian Sherwood and members of Massive Attack (and Chicks On Speed) but my liking of Maffia has now all but disappeared. "Hypnotized" being the last Mark Stewart release I bought. After that it all sounds very "samey" to me.
"On/Off" is an excellent film and a necessary story told really well. Mark Stewart comes across likeable, lovable and really fascinating...like an old English eccentric. Any "fan" of The Pop Group should own this DVD. There are 70 minutes of extras - live footage and gallery stills and a set of postcards with the first 1000 copies.