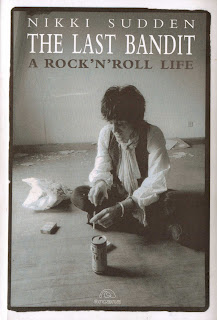 Have spent the last few weeks reading the autobiography of Nikki Sudden, published posthumously this year by the Italian publishers Arcana. As anyone who knows me knows I am a rather large Swell Maps fan. I forget how and where I first heard the mighty Maps, Mark Collins bedroom or my own whilst listening to John Peel (I remember an early tape with a Swell Maps track called "Bleep & Booster Come To Tea" that I simply loved), but for sure the first time I ever heard Swell Maps I fell in love with them. A book written by their lead singer and guitarist then becomes a must.
I must admit that after the Swell Maps split in 1980 I have never listened to or bought anything by Nikki Sudden. I have the Jowe Head LP "Pincer Movement" (Hedonics Records) and the excellent (every home should have one) 7"EP "Jelly Babies" (Rough Trade Records) by Epic Soundtracks, but nowt else - I am desperate for the Phones B. Sportsman 7"EP "I Really Love You" (If you have a copy to sell...please get in touch), and I have a couple of Swell Maps spin-offs; Steve Treatment and Cult Figures...but nothing by Nikki Sudden.
I bought the book mainly for the story of Swell Maps.
Is it a good book? Well, I read all 609 pages so it can't have been a bad one. there were times I got fed up with it and at the epilogue I didn't feel greatly satisfied, but I read it with books waiting in the wings, so it can't have been a bad read. The story of the childhood of Nikki Sudden (Adrian Godfrey) and his younger brother Epic Soundtracks (Kevin Godfrey) is a familiar story. The love of TV, of cartoons of Gerry Anderson, of Hammer Horror films and Carry-Ons. The love of Top Of The Pops and the world of music, I can identify, I can relate..rather like the autobiographies of English journalist and satirist Andrew Collins. Childhood recollections were becoming a jolly yarn. Nikki's love of Glam Pop and Prog Rock, of Slade, Camel, T-Rex and Genesis all makes perfect sense.
The birth of Swell Maps covers the birth of "punk" in Birmingham and is absolutely fascinating. This chunk of the book is the reason why I bought it. Recognisable characters like Spizz, Stephen "Tin-Tin" Duffy and Rob Lloyd pop in and out, Nikki and Epic form bands every week with various and interchangeable line-ups, and with a new line-up comes a new band name. The Spizz / Epic / Jowe Head group - now there's a tape I want to hear!
I can see why Swell Maps split. Only Nikki wanted to be a "Rock N' Roll" star, all the others wanted to return to academia, to university. On their final few dates in Italy 1980 Nikki went AWOL to Venice with a girl he met in Rome for a couple of days. Perhaps the rest of the Maps saw what lay ahead and didn't want to spend a few years in his presence?
The problem is, although he may have thought on the contrary Nikki Sudden comes across as not a very nice bloke, infact he comes across as a bit of an annoying drug addict, be it cocaine, crack, amphetamine, acid or weed he seems to be always on it or searching for it. I don't want to sit here and pick out holes in the man's character but whilst reading I always had in the back of mind the quote : "There are only two types of people who wear sunglasses indoors - blind people and twats", and Nikki Sudden wore sunglasses indoors...the book has the pictures to prove it.
Throughout the 1980's and 1990's Nikki lives what he thinks is the Rock N' Roll lifestyle. Chain smoking, taking drugs, treating women like passive objects (they are chicks), and using folk for his own needs. I have watched footage of his 1980's / 1990's career on YouTube and it is so bloody bland, at some points I didn't know if it (the book and the videos) were comedy or for real. I carried on reading because I wanted to read about the death of his brother, which is interesting. Again, a drug addicts death but interesting and then I wanted to read about the Maps reunion and the Epic Soundtrack benefits but there is little written here. What we do have is pages and pages of names and places that all get muddled up in to one big miasma and melting pot so names and places mean nothing. Tired old non-stories that make Hugh Cornwall's autobiography seem like Keats. One night stands, active glands, xenophobia over Deutschland, crack pipes in LA, yadda-yadda-yadda.
Contradiction runs throughout. I really liked the comment that he hated support bands because they take up too much soundcheck time, that is the language of a real cunt.

So. Is it a good read? Not really. Necessary for the history of Swell Maps but beyond that story comes the story of an arrogant, ligging, freeloading irritant with very little to say.
I could say more, but won't. The book hasn't put me off listening to my Swell Maps records, but maybe tainted the enjoyment a little.
Posted by Steve at 20:02