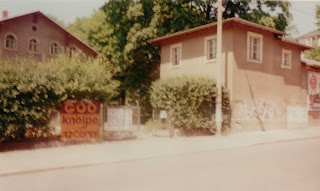 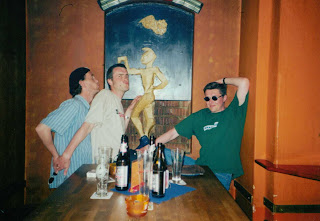 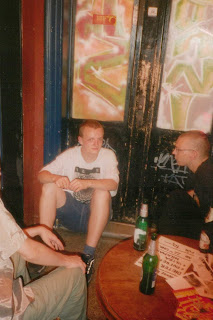 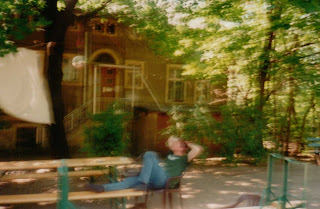 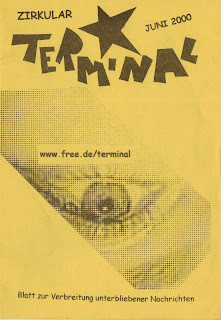 It was after reading the Idwal Fisher blogspot review of Hyster Tapes where he mentions the Hyster Tapes release "Doin' It Dresden Style" by Dieter Muh as a top notch Muh release that I thought I must dig that tape out and give it a listen.
I think it was circumstances of memory that never fully made me enjoy the recording / release but now 11 years after I felt brave enough to slip the recording (I have a CDR of the evening) into the hi-fi, turn it up to eleven and give it an ear or two.

The story (if there is one) of the evening is very hard to tell. Mainly because there are four protagonists involved and two of those no longer speak to me, so it would be a tad unfair of me to relate the whole story.
Background:
Dresden AZ Conni was to be gig number seven of a 12 date European tour organised by myself and Steve Underwood featuring Dieter Muh & Putrefier, it ended up being gig number three of a 4 date tour that could have been 5, but we gave Belgium a wide berth and headed back home to England! Not my idea at the time...but like I mentioned I will not go into the whole story.
It was back in late 1999 that Steve and myself cooked up a plan for Dieter Muh and Putrefier to take Scandinavia & Mainland Europe by storm...Steve's theory that Putrefier didn't have a "European Market", but with Dieter Muh we could give Mark an audience. We organised the tour via Fax and letters - this was all pre-E Mails, mobile phone texting and Internet Forums. Old School.
Before Dresden we had spent three days and nights in Berlin. Previously to Berlin we had spent two days travelling from Eastern Finland, through Sweden by train to get to Germany's capital. Two sleepless nights with Steve on the top of a cruise-liner (between Helsinki + Stockholm) and in a train carriage sat shoulder to shoulder with the unarmed faction of the Mujaheddin (between Stockholm + Malmo) whilst the other two found comfortable sleeping accommodation. (It was on this particular train journey that I discovered that Steve knows the catalogue number for every Small Wonder Records release and what is written in the run out groove of every Small Wonder record...it was a long 8 hours). In Berlin we were the guests of Daniel Lowenbruck and Jurgen Eckloff and sleeping on a floor. (I am not complaining here .. I was 100% as happy as a pig in shit)!

So. Dresden. The gig was organised by Markus Koehring (I think that is a correct spelling). I was very excited by the venue, both Troum and Soviet France had played there. The venue itself was a little like the 1in12 Club in Bradford. Live venue, meeting place, restaurant, bar, left-wing / anarchist bookshop all included and the venue came with the added bonus of having a room for bands to stay over so for the first time in five days...I had a bed! There was a shower and washing machine, it was nirvana. We arrived two days before the gig and spent most of the time drinking. Our appearance coincided with the Dresden Beer Festival, either immaculate or bad timing. The weather was glorious and the venue had a garden where we could smoke, drink and relax, and relax we did. It is strange that I was the only one to bring along a camera (which was on its' last legs and taking shitty blurry pictures) to document the tour - most of the tour was documented on my dictaphone. I still have the tapes and Mark Durgan doing his impressions of John Cleese and (especially) Ronnie Corbett in the AZ Conni garden. They always raise a titter. But to the gig - was it any good? After a first play in bloody years I can only agree with Idwal Fisher that "Doin' It Dresden Style" is one of Muhs' better releases.

Dresden performance holds bad memories for me because it was the gig where I found out that 50% of my equipment had broken. My CD Player and Effects Box. I still had a tape machine, CD Player and mini-mixer to work with...but not really what I wanted. Bummer. I had to share effects with Dave through his mixing desk. Our set was mixed live by Y:Ann of Ultra Milkmaids and witnessed by around 15 people. After our last gig (in Mantsala, Finland with STROM e.c. and Grunt) we decided to be more "ambient" and did a 40 minute "improvised" set. It all begins very quietly with shortwave radio and tapes. I left a microphone at the front of the stage to pick up conversation from the audience before Dave attacked with a metallic rhythm and we both played with white noise. After 15 minutes we performed "Sea Sick With Sand", an old piece from the mid 1980's, with myself just adding minimal voice loops. Then Dave brought in an electronic pattern of random bleeps and waves - a sound sample of medical equipment / devices he had lifted from either "New York Ripper" or "Cannibal Ferox", he was mutating the sound through a multitude of effects..I tried adding some untreated voice but it wasn't working so I left it all alone. 25 minutes in and we do a live version of "Dumhome" from the "Eponymous" album (on Naninani Records). I found myself doing some strange Q+A type noise bursts against Dave's constructing until he cut all sound to play the sample; "you play with yourself, you play with yourself and then suddenly come". I fucked up big time here and so pissed off was I...I walked off stage to stand at the back. It was a break in the rhythm we had agreed on, but I messed it up. DAMN. Steve Underwood convinced me to go back and carry on but Dave was building a cacophony and it all ended with Dave declaring; "I like sex, I really do like sex and no man can please me".
It truly is a great journey and a listen I had not enjoyed before. Memory has obviously healed.
Mark played a blinder too, jumping on members of the audience who were sat (comfortably) on a leather sofa in front of the stage. I don't remember much of the Ultra Milkmaids set, I was most likely sat out in the garden smoking fags and drinking beer. He did have a bunk underneath Dave for which (if he is reading this) I belatedly apologise.
The next day we headed for Leipzig and gig number 4 of the tour......