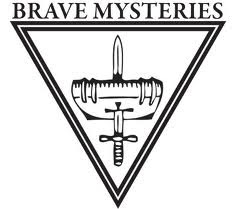 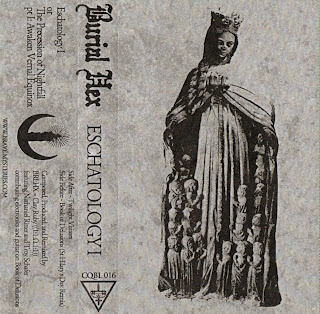 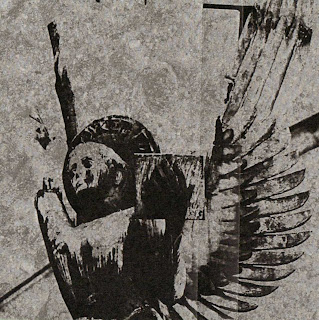 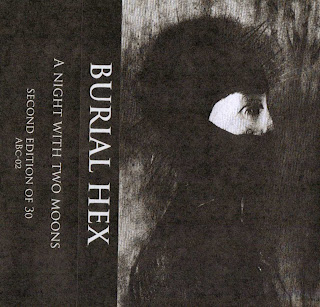 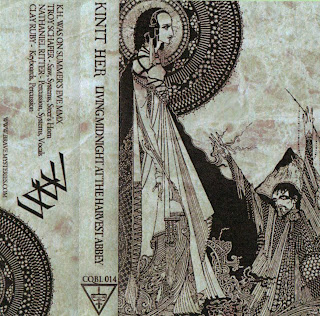 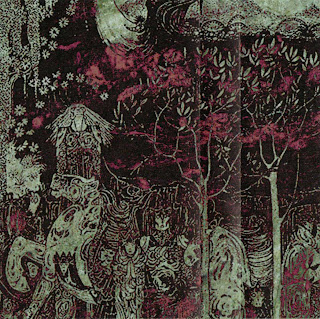 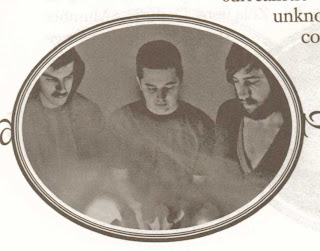 I got a nice package through from Brave Mysteries the Wisconsin (USA) based label this week. I must comment on the speed with which they mail their stuff out, it is very impressive, if the jiffy bag didn't have a postal mark saying Wisconsin USA on it I'd've thought it was posted within the UK..it was that quick!
At the start of the year I bought a few releases by Burial Hex, some CDr's and tapes that were going cheap in the January sales and I must admit to being a tad disappointed with some of the sounds. The two CDr's on Skulls Of Heaven ("MaHaBoNe" & "In Girum Innus Nocte Et Consumimur Igni") were not a scratch on the stuff I was getting throughout 2010. Strangely enough the most pleasurable release was a tape on the UK label Turgid Animal ("Blood Between Her Lakes"), I say strangely because I relate the Turgid Animal output with cheap noise stuff. Put my hands up - I was wrong. Anyway, I was kindly sent the cassette "A Night With Two Moons" (Aurora Borealis:ABc02) and it restored my interest in the works of Clay Ruby. "A Night" plays like the soundtrack to a silent movie. Huge organ / Wurlitzer sound. I have not heard anything like it before. I listen and marvel. Last year Brave Mysteries released the Burial Hex cassette "Fantasma Di Perarolo"; a recording of a live performance on church organ recorded in Italy, the "Two Moons" cassette is similar - not the same...it is more frantic - but similar. "Haxan:Witchcraft Throughout The Ages", "A Night With Two Moons" would make an ideal soundtrack. So when the Troniks board advertised a new Burial Hex release, the tape became a must.
"Eschatology 1" (Brave Mysteries:CQBL 016) is a C60 limited to 100 copies. It is a tape of two halves with Side A: "Twilight Visitors" sounding very much like an old Nekrophile release in parts. Heavy echo effected electronics inter-twined with piano and percussion. It sounds like a live recording, if not then recorded primitively. I could be wrong! Whilst playing the track (at work) today a courier from DPD told me that it sounded like early Pink Floyd. Side B: "Book Of Delusions (St. Hilary's Day Mix)" is trance like with a pulse like beat floating throughout and some excellent guitar patterns - mixed just at the right level. The pulse is very Throbbing Gristlesque, immediate and compulsive. (persuasive)? Thinking back the The Haxan Cloak 12" I was writing about earlier, this track is very similar to his sound but it carries a more raw edge, less new-ageist and more ritual. (as if I'm making any sense).
Also in the jiffy was the cassette "Living Midnight At The Harvest Abbey" a C37 by Kinit Her. I have seen Kinit Her live, two years ago at The Equinox Festival and I wasn't over impressed but going with the chance that after the Compass Hour cassette release (a Kinit Her side-project that Brave Mysteries also released) and the addition of Clay Ruby to their ranks, and it was only 37 minutes long, so what is there to lose(?) I bought the cassette. I am glad I did as it makes me smile. The first side is an eighteen minute "jam" that took me back 25/26 years. It has the same atmosphere and sound as stuff I was recording back when. Honestly!
The Hulme Crescents in Manchester was a magnet for students, squatters, junkies, misfits, artists, anarchists and musicians. (I scored 5 out of 7 there)! It is where Carnifex Recordings were based and two of the groups I was involved in - Rise & Muhviertel. I have written about these times before so won't bore you with the detail...but there were days when a lot of folk would gather at a squat situated in William Kent Crescent (1st floor - 143 I think) where the Carnifex "rehearsal space" was. Drums, percussion, 2 guitar amps (A Roland Jazz Chorus + Vox AC30), a Bass amp (Peavey and/or Orange...memory fails), a few keyboards, a Roland Space Echo, a couple of mic's and half a dozen guitars.
Numbers ranged from 5 or 6 (great band) to 8 or 9 (not so popular), the first ritual would be the (hot) knives..sometimes the addition of magic mushrooms but as a rule it was knives through a galliano bottle. Pipes, Chillums and a packet of "Rolled Gold" would be taken up to the rehearsal room where we would choose an instrument and "play away". I always liked sitting behind the drums! (Sitting being the operative word there). More often than not I would record the session and label the cassette "The Initiates Ov Carnifex". I shall always remember the time when I was playing a one-note drone on a Casio keyboard, lost in the drone and sound when I opened my eyes looked over my shoulder to see everyone else in the room wearing huge beaming cartoon like smiles. Christophe Lebasque sat behind the Vox strumming the bass guitar and Andy Wright next to him chanting "I Love The Sun". Beautiful moment and that is what side A of the Kinit Her cassette sounds like to me. They have the sound of an electronic saw mixed in with the sound. Genius.
The second side has a 'spaghetti western' feel to the sound, almost Ennio Morricone in texture. (I haven't seen a cowboy film in ages - it's been all quiet on the western front). The tape is a great release and will get many a play at Hartop Towers.
Hopefully both groups / projects will make it to the UK soon. I see that Nurse With Wound and Current 93 are treading the boards this summer in the UK...after last years disappointment I shall not bother, I'll save my money and just hope that Clay + friends make it over.