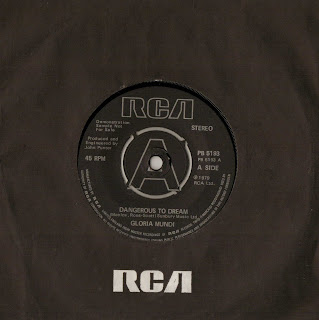 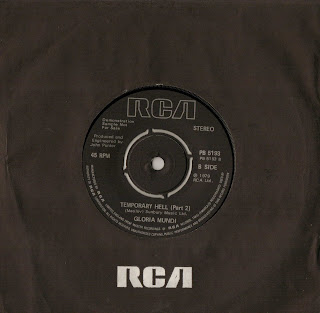 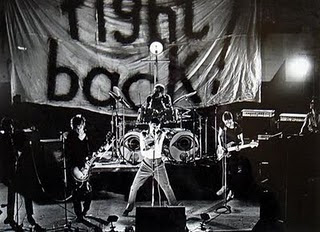 Still reading the excellent "This Is Our Generation" by Tony Beesley and one of my favourite bands gets a rare mention. Gloria Mundi. The fact they get a mention in a book written about life as "an outsider" in Northern Britain in the late 1970's made me smile and remember their brilliance. As soon as I got home (I was reading at work) I dug out the 7" single "Dangerous To Dream" (RCA Records, 1979) and gave it loud spin. The single is a bizarre choice coming from the second album "The Word Is Out" from which the catchy "Y.Y." had already been released. Bizarre because it has no catchy or disposable elements that fitted a "new wave" single at that time. By 1979 commercial punk, ska and power-pop were sweeping the nation and Gloria Mundi put out a single that harked back to the conceptual 7" of the mid 1970's. It does have a break of swimming synth and slap bass (almost Level 42) two thirds in..but catchy radio play it ain't. It is however a classic single just not a commercial one. The B-Side "Temporary Hell (Part 2)" is a guitar solo leading to jazz-chaos with keyboard, drums and saxophone. Beautiful stuff. Different, but then again even in their time Gloria Mundi were different.
I have all their releases and a few of the spin-off Eddie & Sunshine records. Gloria Mundi were primarily a Rock Band, mixing Krautrock with elements of early Genesis and the energy of punk. I have seen them being described as the "First Goth Band" by Mick Mercer...but this description is shit! I always associate them with Ultravox! They played a few live shows together (I think the singer Eddie Maelov + John Foxx went to Birmingham University together...could be wrong) and the GM saxophonist played on the Ultravox! song "Hiroshima Mon Amor". A great regret was that I never saw them play live. They played Lincoln in the summer of 1978 but I was holidaying with the parents in Cornwall at the time - I think Patrik Fitzgerald supported. I (again) could be wrong but I think they had all but split when the second album was released.

So, very few words have been written about Gloria Mundi - there must be a book waiting to be written? Nobody I know has any Gloria Mundi records. I have always been the only one! A few years back I was spinning "I, Individual" LP when a friend called round and was convinced it was Amon Duul I was playing. I used to be a member of their fan club, receiving newsletters and a small tract every so often.
So whatever happened to....Gloria Mundi? The keyboard / vocalist Sunshine Patterson is now a working installation / visual artiste based just outside Lincoln. Eddie Maelov I have no idea, and the second bassist Nigel Ross Scott joined Re:Flex and had a big chart hit with "The Politics Of Dancing". Original bassist "Ice" formed a group with Ultravox! guitarist Stevie Shears but nothing became of it. C.C. joined Glen Matlock in The Spectres and then disappeared (rather like drummer Mike Nichols and guitarist Beethoven).
If you ever see an old Gloria Mundi record buy it - you may be pleasantly surprised. I am thinking about lobbying RCA Records for a retrospective CD Box Set.