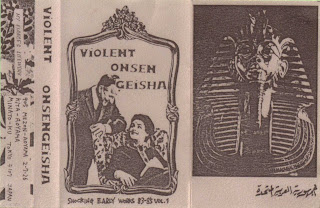 Spent some time today listening to the cassette "Shocking Early Works 83-85 Volume 1" by Violent Onsen Geisha. This is the only release I have from the project run by Japanese artist Masaya Nakahara. Interesting stuff, tape splices cut with cheap synth effects cut with "pop" records of the 1980's (Paul Hardcastle & Art Of Noise very recognisable), Japanese spoken word and 1950's Z-Movie incidental music. I like the tape. Quite a lot of it (especially Side A) reminds me of what I was doing back in the late 1970's with cutting up radio / TV and teenage lyrics. There's plenty of tape hiss but no heavy nasal breathing into the microphone. (Makers of tapes back in the 1970's might know what I am getting at here)?
Anyway - great tape - early plunderphonics or as I described the work of DK720 + Grace earlier "Audio DaDa". Before playing this cassette I listened to a live Sefahat CDr from 2000 and there are similarities.

A year or more ago I contributed to a VOG topic on the Troniks forum board and mentioned I had this cassette and that I hadn't given it my full attention but I saw it wasn't listed on the Discogs site. The tape came in a package of stuff from Steve Underwood (vinyl, tapes, CD's etc) a few years back. Messages came in asking if I was interested in selling, swapping, trading etc.....I was open to suggestions but then I played the tape (in full) and really I like. the tape stays in Hartop Towers!
Posted by Steve at 20:06