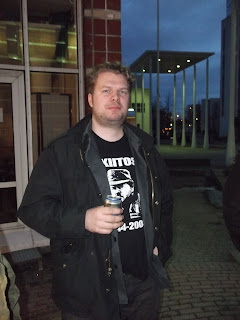 The following review comes from the "Special Interests" Forum and was written by Mikko Aspa.

"Grey Park, was both good and bad things. Good thing was that there came some interesting sounds and textures, the not so good thing was that there was nothing really out of ordinary. Bad thing, was non-musical qualities. If you got 2 guys doing live visuals on huge screen and 4 guys doing sound, how can it look like this? I guess it's the "academic" approach. Guys sitting in row, pretty much doing nothing, for 40 minutes? When you close eyes, its slowly shifting from thing to another, occasionally sounding very nice, kind of stuff multilayered droning noisy electronics, what I'd enjoy.. perhaps not so perfect transitions, and most of all, appearing to be "jam"? But as soon as you open eyes, there are these 4 guys, sitting, with their table lights. Perhaps without lap-top, but with the Merzbow'ish (e?)motionless style. One great moment is like these two imperfect "whistle" type of sounds, what actually makes members suddenly react in a way that "who was that?", checking out eachothers and giving gestures of disapproval or uncertainty. I think mr. Pilvari was using short wave radio. Kind of cheaper bulk radio, though. But already that alone was nice. Simple radio static and someone adding little nuances. Perhaps kicking out videocrew and 2-3 members, someone could do solo of similar material, but knowing better what exactly to do.
Unfortunately for such a long set, simply fall under category where it's quite enjoyable if you just throw together whatever 4 sounds and see what comes up. But to be actually TALENTED doing it, making it exceptional, would perhaps require some defined ideas and something executed with more precision than "lets jam".
However, I'm curious to check out some of their recent releases if there are some. I think the ltd 100 copies 7" was the last thing I've heard.

Dieter Muh was perhaps different that they have been? Shrunk into solo project. He was doing soundtrack for video made by ex-member of the band. Video started nicely, but went into quite dull abstraction. Sound material DM came up with, was far more defined and advanced from GP approach. He would actually focus on some important basic elements, and allow them to shift and modulate quite extensively, building slowly layers of sounds behind it, but always having the red line what actually is the lead sound of the piece. It would have this rhythmical industrial feel to it, which slowly mutated into noisier soundscapes. And I could have applauded for idea to actually play more than just one piece. He would stop.. or lets say let the song fade down to almost silence, before starting entirely new song. No bullshit transitions of artists not really knowing what's going on, but sharp well executed compositional skill. Middle of DM set was rhythmic electronics. One could perhaps even say malformed beats being constantly adjusted, and new details thrown in mix. It wouldn't be any clean drum machine dance, but most certainly closest to such direction what I ever heard from Dieter Muh. The end of set became moodier, with rhythmic metal percussion sample, with strange dysfunctional sounding loop rotation, covered with extensive effects. Distant drone humming... and at some point when I opened my eyes, artist had left the stage and minimal sound going on was simply result of equipment playing itself for last few minutes.
Nice gig. Perhaps lack of heavy-duty PA power, it wasn't as noisy and fierce as Mäntsälä many years ago, but auditorium without any need of earplugs was fine too!

Only thing not that great, was the abundance of art fags. Not that I would care who comes to watch the shows, but when they don't. People just hanging out and the cunts talking loud over the music about most retarded mundane things. It's different in a bar. When you pay in, to have fun. And within loud music, it's fine. In quiet auditorium, where you didn't spend any money, why not leave if you rather be elsewhere? I rarely bitch about things, but had to ask these two cunts to keep their mouths shut. Was thinking should I be civilized or not. I chose the first option and actually regretted next time. So, lets wait the next opportunity to see how performances in the audience are welcomed, heh... "

Picture:
1: Mikko outside the Malmitalo, Helsinki.
Posted by Steve at 09:09