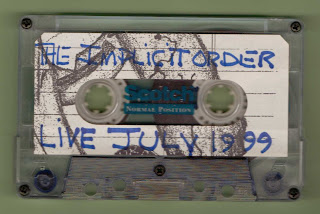 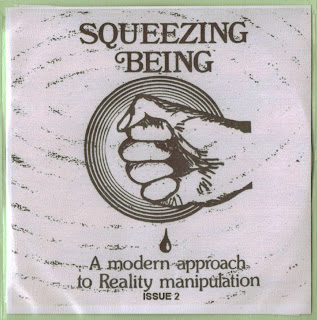 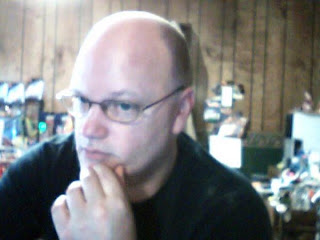 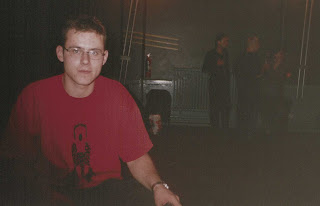 I dug out a treasured tape earlier in the week and gave it a play - probably for the first time this century: "Live Demos" by The Implicit Order (AKA Anthony Washburn). Chances are this is the only copy of this cassette. Back in 1999 I made an attempt to start a credible label. Alongside Mick McDaid (who operated as Outsider Records) we formed Mouth Recordings. (Quite clever wording I thought - Out from Outsider + Muh from Dieter Muh being in there). The M.O. of the label was to release quality live recordings on ultra limited CDr and sold at a reasonable price. Our first three (and only) releases were "Feeling A Little Horse" by Dieter Muh, "Breaked Live Wires" by Government Alpha and "Live Im Hybidraum" by Column One. We were then struggling as Ora and The Haters declined releases, so we decided to knock the project on the head. Then we received this tape with a letter from Anthony ( we were in correspondence throughout the late 1990's) asking us to consider the tape for a Mouth Recordings release, which we had to decline as we had folded the project. A shame, as I really liked the tape.
This put me in mind of a compilation album Dieter Muh contributed to back in 1999: "Squeezing Being - Issue 2" on Wholeness Recordings. The album took 11 years to be released. Anthony Washburn is the boss of Wholeness Recordings. 11 years is not bad going, I have recorded stuff for compilation projects that have yet to be released, Joel St. Germain's Spite Records non release of Dieter Muh's original recording of "We're Not Happy.........Until You're Not Happy" for a non existence tape compilation still sticks in the throat.
Anyway. 11 years is not bad going, and at least the album has seen the light albeit as a free download and not a CDr. I am not a fan of the download - free or not - I am not interested. I prefer the "physical" format and a piece of art/work that folk have taken the time / space / money to produce for my pleasure / interest / research. Is that fair?

Luckily I have friends who were willing to put the album on a CDr and download the sleeve for my pleasure. Does the sound of 1998/99 still stand up when freshly released in 2010? Has the sound "dated"? .... slightly.

The album contains familiar names alongside total unknowns and perhaps one-offs created only for "Squeezing Being Issue 2". It all kicks off with the lo-fi tape rumblings of Big City Orchestra, a project of whom I have never been a "fan", they had a single out on Drone Records which was OK but other than that I can easily leave them alone. Sveen follow. Sveen being the recording project of EE Tapes operators Sven & Eriek. Sveen offer us a sonambulistic track of crashing waves and violins. Like listening to Radio 3. Beautiful stuff that draws you right in before BLAM and A:M:K enter with a loud offering of turntablism.
Grace follow with his own brand of audio Dada. To my knowledge this is the only release by Grace aka Mark Wharton the man behind Just Glittering, Idwal Fisher and the goalposts of Batley R.C. It has a nod of the cap towards Deepkiss 720, but it is a fascinating listen. Then follows Doc War Mirren and Hjalmer Geiger. Two projects who sound like they have just bought a Roland SH101 and are wondering how it works. This offering of non-constructual sound dates the album. Enter Turkey Makes Me Sleepy with "Syphilitic Aortic Regurgitation". Good track built of tape samples (mainly spoken word). I have a feeling that Turkey Makes Me Sleepy is a pseudonym of Anthony Washburn, the track sounds alot like The American Tract Society. They were another one of Anthony's aliases. Fine stuff and I think the word 'Turkey' is meant as 'Cold' rather than 'Thanksgiving'.
Richard Ramirez & AMDF follow with "A Guy Like You". I've never liked the work of Black Leather Jesus or followed the career of Richard, I understand he has some kind of "cult status" in the HNW world, just sounds like a barrage of cheap noise to me. The Implicit Order follow with a short ambient piece and out of place as the Post Prandials follow and for the first time I press the FFW/Next Track button on the CD Player. On to The Haters with "Clici-Clic 40". The sound of a hole puncher through a multitude of effects. Nice. Always good to get The Haters on a compilation as they have "collectors", folk who want everything that GX Juppiter has released. This is a great track and followed by Dieter Muh with "Wood Land" ( a title given by Mick McDaid, a strange pleasure park where all the rides are male erection themed, and now even funnier as I live near Dartmouth and the theme park "Woodlands")! The track is Dieter Muh still trying to find their sound. At the time we wanted to release an album called "Back Garden Birds" and were using samples of birdsong, distorted and manipulated beyond recognition. "Wood Land" features said sampling alongside guitar, percussion (Tibetan Bowl + Roto-Toms) and reversed vocals. Around the same time we recorded the track "Pensile" for the Harbinger Sound compilation LP "Stand Still Like The Hummingbird" (Harbinger 006), this has yet to see release.
The album ends with Stream Angel and some amateur psychedelics. A track I would have FFW'ed but it was the last track. Two FFW's a compilation CDr ain't bad.
The album does sound dated in parts, and in other parts is highly unlistenable. I was reminded of compilation tapes from the early / mid 1990's especially the "Elegy" & "Notre Dame" series that EE Tapes put out where you knew you were going to get some shite but the gems were worth their weight in gold.

This album is downloadable (for free) from Wholeness Recordings who have a MySpace site. I was going to put up a link but after clicking on the page and waiting for adverts to download before I could get to the beef (Legal & General have got an offer on Anthony) I gave up .. if you have better patience than I go to the site and enjoy. It has rare Dieter Muh and Grace tracks and a couple of classics by The Haters and Sveen.