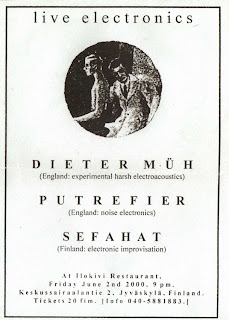 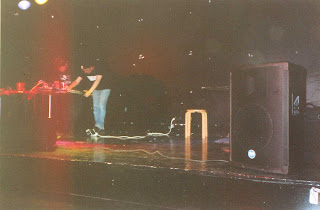 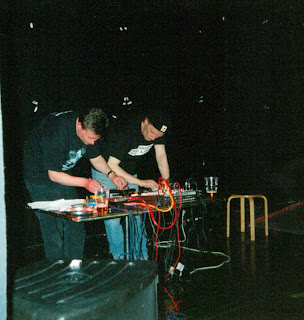 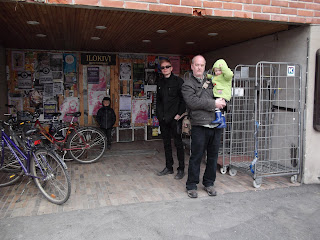 Eleven years ago Dieter Muh played their second ever gig on foreign soil at the Ilokivi in Jyvaskyla, Finland. I mention this because I returned there last week making a journey I never thought I would make again. The sight of the venue doors (it was locked when I got there), and the surrounding area (it is part of the University) made the memories flood back.
June the 1st 2000 and Dave and I arrive after a three hour flight and four hour train journey to be met by the gig organisers; Juri, Jari and Weno. Juri and Weno were then recording as Mnem but were not playing live, Jari was part of Sefahat who were. Juri showed us to our sleeping accommodation (to drop off the equipment), a tomato and then virtually every drinking hole in Jyvaskyla. At this time of year the sun does not set in Finland and the bars stayed open until about 4 a.m.
June the 2nd 2000 and the day of the gig Dave and I are atrociously hungover. Weno has vodka for a midday breakfast, we share a tomato.
The venue is a small studio theatre built inside the University grounds, a nice walk through tall trees and woodland. The other "act" on the bill was Putrefier. Mark Durgan and Steve Underwood took the flight and train journey on the same day and arrived around two hours before the doors opened. The gig was the first of "Harbinger Sound Travelling Circus & Freak Show Tour 2000".
The crowd was modest, around 30 people sat watching whilst Sefahat performed 40 minutes of improvised scratching and skronking. At the time they reminded me of AMM or suchlike. I have a recording of the gig, played it a couple of weeks ago - there's a lot of guitar plucking and shortwave radio going on. I remember the guitar being played with socks and Tommi Keranen having his electronics set up on an ironing board. (Irony board)?
Mark's set I have unfortunately forgotten but I do know that on the tour he played blinding sets, so it can't of been a bad one.
Dave and I had prepared three different sets for the tour, by that I mean we had three "openings" and three "endings" and whatever happened in between happened. This was the usual (at the time) set up for a Dieter Muh live performance. We began with small voices, Klaus Kinski orating, children playing, minutiae cracks and a voice declaring "Jesus Loves You". I have a recording and the first 15 minutes are bloody good, some of the best Dieter Muh live to date. After this the gig went a little downhill - we decided to do an old "song" from the early 1980's, an old track that Dave and I wrote called "A Mouthful Of Sand". It went downhill as it required me to do some vocals and the trouble was...I could not remember the bloody words. It seemed such a good idea at the time and I had gone through the lyrics earlier, but under the heat of the lights my mind went blank and I just kept repeating the line "A Mouthful Of Sand", not only that, for some unknown reason I was shouting in a Southern American accent! At this moment in time all I could think of was Cliff Richard.....When Cliff Richard was given an O.B.E. sometime in the 1970's I remember him being asked if the knighthood would change his style of music and his reply was that he would stop singing in an American accent and sing in his true voice, that is all I could think of whilst onstage in Jyvaskyla with a microphone in my hand. I think the rest of the set just fizzled to an end. I do remember Steve Underwood making paper aeroplanes and writing Cabaret Voltaire on them and throwing them towards the stage and Weno slept throughout.
So, April 18th 2011 and I returned like a pilgrim to the Ilokivi. A touching moment.