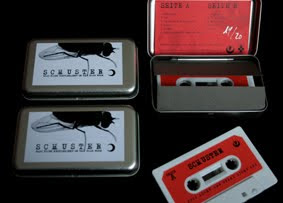 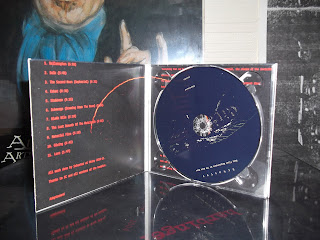 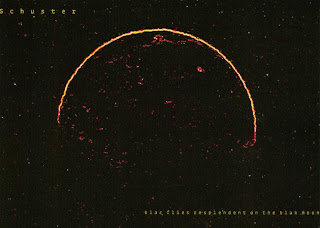 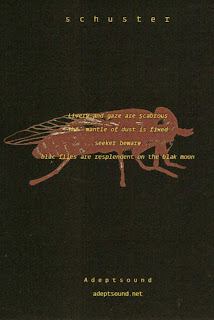 I have been pleasantly listening (over the past few weeks) to the latest release by Australian based artist Schuster. "Blac Flies Resplendent On The Blak Moon". It has been released as an ultra limited cassette (in an attractive tin case) by the German Licht Und Stahl label, and in fairly limited CDr form on Schusters' own Adeptsound imprint. Digipack sleeve, postcard and probably badge will come in the jiffy if you order direct! I got a promo copy a few weeks back.
Over the past year or so Schuster has been releasing material as if he was some member of an "end of days" cult, with limited CDr's and compilation appearances and all pretty damn good stuff. "Blac Flies" ( as shortened title, I have no idea what the full title means.....) is Schuster's strongest release this century. Certainly his most personal.
The CDr plays as one long track (with 11 parts), whereas the cassette has gaps between tracks, that is the only difference in sound. The cassette is not an alternative mix, just a massive carrot to us ass like collectors.
"Blac Flies" opens with "Bellerophon", the slayer of monsters. The sound creates a mystical feel and sounds like something that should be running over the opening credits to a sci-fi movie. Cinema sound / mystical drones, a great opening and we are left with the sound of a trapped fly in a gass-jar. "Sulk" follows. A strange track with Schuster vocals. Words from a suicide note over reversed loops...very down and depressing and the feel of melancholia continues throughout the next two tracks. "Stubborn" is a high energy heavily rhythmic piece that comes in out of the shadows. There is a track called "Flag" on the first ever Schuster release: "Assumption" (Silencer Tapes 1986. Cat No: Silcass 01) and "Stubborn" takes me back to that track. "Stubborn just to silence her" - a great lyric. Schuster mailed me the rhythm track last year to work with in the hope we'd use it for an I.B.F. (Ideas Beyond Filth) track (after the success of the Harbinger Sound released 12"EP there was talk of a new LP for Hanson Records) but I used it for a Dieter Muh live performance, and Schuster has included his interpretation on the album. The track comes out of nowhere and would have been a great ending to side one of the tape, except we have "Submerge (Drawing Down The Moon)", and back to the meloncholic sound. The sound of a hibernating beast in the sewers.
Side two (of the cassette, or track 7 on the CDr) carries on the melancholia with "Blakk Bile" and a sound of dark ambience and static / radio interference that isn't too far from Lustmord's "To Arecibo" album. Schizophrenic chaos ensues with ""The Last Breath Of The Matriarch", an angry poema of high quality, chaos continues through "Material Fire" which sounds like mass sample of old 1980's Schuster recordings thrown onto the fire before everything calms into "Giving"... the jewel of the album. Crystal clear recording of sensibility over the sound of insect rain. I can say no more, you have to hear this track!
Certainly Schuster's best album since "Assumption". Lustmord, Nurse With Wound, Wolfgang Press, Portion Control, Mark Stewart....it is all in there and like I mentioned at the start - a very personal album.
For the releases in 2011 this one will become essential.