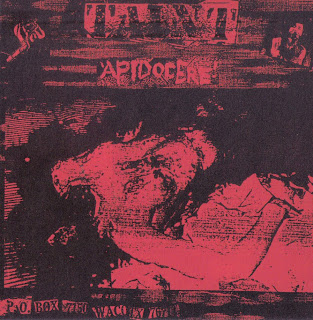 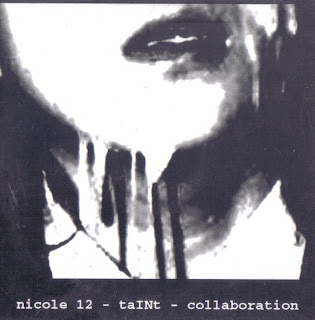 Saw a message on Mikko Aspa's Special Interests forum from a chap wanting to complete his Taint collection. One of the items listed was the CDr version of the album "Candyman" the split project with Nicole 12. I read it, and thought......I've got that. Haven't played any Taint in years so I stole an hour or so to listen to my Taint collection.
the first time I heard Taint was the split 7" with Smell & Quim that Red Stream Inc. Released in 1993. An excellent single all around but unfortunately Taint suffer from the fact that the S&Q track is (probably) one of the best S&Q tracks ever. "I've got a virus and you're a Nazi". The Taint track though is called "Apidocere" and is a great 3 minutes of tape noise mixed in with white noise and background screaming. For '93, good stuff.
I've got the Freak Animal compilation CD that came with the #11 mag, but I decided to miss that out and play the 2002 Nicole 12 collaboration.
Ten years ago and Mikko used to mail me stuff. I did used to mail stuff to him too let it be said - but I used to get packages from Freak Animal. A CDr version of "Playground" came first. I was impressed - and then a year later I got "Candyman". (I imagine titled after Texan serial killer Dean Corll, with Taint being from Texas and all). It is a good album. Subtle, dark and creepy. OK, there are moments of standard fayre harsh noise (SFHN), but it has moments of outstanding Power Electronics (PE). The opening track "T.M.H.C." could have been on S.P.K.'s "Information Overload Unit" LP. Seriously! "Facts" is a great instrumental in an old school industrial style. I've also got a test pressing of the Harbinger Sound 3xLP compilation "...And The Vultures Miss Nothing" that has 2 Taint tracks on it...but I left the Taint alone after "Candyman". I will not be getting in touch with the guy on the forum, it's a release I want to keep.

On a separate forum board thing at the end of last year there was a conversation about Konstruktivists and the work of Glenn Wallis. Some guy had a mint copy of the "Psykho-Genetika" LP and was willing to sell. I lept in with a modest bid that I thought would get refused but got accepted! The seller was Keith Brewer. AKA Mr. Taint.
Internet research leads me to believe that Keith has finished Taint and is now called Mania. (Perhaps that is why some guy wants to fill in his Taint gaps before it disappears for good)?