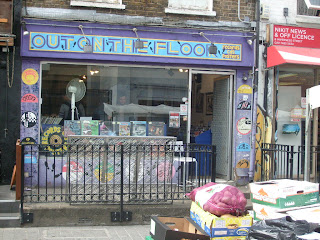 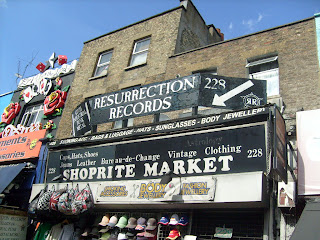 Secondhand vinyl shopping in London is, generally, a waste of time. A lot of the stock is either way over priced or fairly priced (rarities etc) but when in London I'm not going to spend £70 on a record and lug it through the streets of London for goodness knows how long and not have enough money for beers on the train home...am i?
That said, whenever I go to London I rarely come back empty handed. The best I have found are The Record & Tape Exchanges, and because of its' locale I usually end up at the one in Notting Hill. Last trip I found an LP by Eddie & Sunshine, and this time a copy of "The Album" by Eater. (£6). This journey though I was visiting North London, so a trip to Camden was on the agenda. I hadn't been to Camden for about eight years. A sunny hot day and the streets were full of tattooed, pierced, studded jacket wearing Mohican Punks - the picture postcard sort, that and casually dressed skateboard youth.....Not ideal but I did find a Record & Tape Exchange I had forgotten existed. Found a copy of the 1993 CD Re-Issue of "Snappy Turns" by Mark Perry. (£4). Very Nice. Pleasant chappie at the counter told me of another secondhand place on Inverness Street (virtually opposite) called "Out On The Floor". This is a typical "London" vinyl shop with everything over priced. Stuff I would be paying a pound for in Barnstaple or Truro is a fiver in here. Blondie singles that a 5 for a pound in most charity shops down here in Devon are £3 - £5 a pop in this shop. (Not that I would ever buy a Blondie 7", but you know what I mean. OK, replace Blondie with The Stranglers then). A fair amount of records in the shop but I left empty handed.
Then I found Resurrection Records on Camden High Street (just next to the T-Shirt market). It's snook away underneath a Retro Clothes shop, and well worth the visit. Specializing in Punk/Goth + Industrial and nicely priced. I bought a Portion Control Demo 7" ("Raise The Pulse") for £3 and grabbed a handful of Punilux postcards! Could have spent longer in this vinyl basement but money was to be saved for the NWW/Current 93 merch' stall later in the day.....

I still prefer the Record & Tape Exchange in Notting Hill and the one in SoHo over any of the shops mentioned in Camden. I am certain there are more decent shops in the Capital - my search is an endless one.

Pictures:
1: Out On The Floor. Inverness Street.
2: Resurrection Records. Camden High Street.
Posted by Steve at 15:25