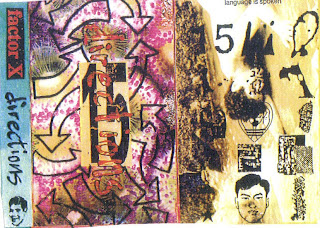 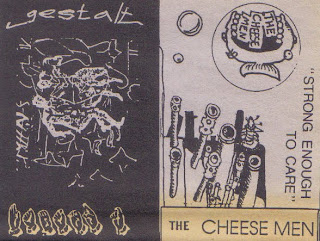 Towards the end of last year I was asked by Steve Underwood if I knew anything of Exeter based artiste Shaun Robert A.K.A factor x. He was wanting to contact Shaun in relation to releasing a limited 12"ep of old material on his Harbinger Sound imprint.
I must admit that the name drew a faint recollection, I do have a couple of compilation cassettes with factor x contributions - I think they are both editions of "Impulse" tapes that used to come free with "Impulse" magazine but in this house of boxes with myriads of old tapes I can't put my hands on them. I remember factor x cassettes used to get reviewed in that old "Goth" magazine "Music From The Empty Quarter", but like I said...faint recollections. I certainly couldn't hum a tune.
So, wearing my private detective hat I set out trying to find Shaun. (I must point out that I do not live in Exeter - I live 23 miles down the coast, but I have family and friends there). I put up questions on the Cavern Club forum, and asked my brother-in-law Michael. Michael came up trumps, he actually used to know Shaun in the 1990's. Shaun used Michael's Eeriephone Studios to record, even sharing a cassette release on the German Maljugin Musik label. (Michael was part of the Cheesemen - before becoming bass player with Appliance). The cassette was called "Gestalt"/"Strong Enough To Care". Michael had seen Shaun in Exeter in 2008 selling "The Big Issue" on Sidwell Street. I called the local Big Issue offices - but they don't give out information on their vendors. Bastards! Notices were posted out to homeless charities and refuge centres in Exeter - "Do you know this man"? I also contacted Zan Hoffman of ZH27 label in USA who released a series of factor x cassettes.
All was quiet until last month.....
Steve alerted me to a factor x bootleg LP of an old cassette release called "Directions". Ultra limited and no information on how to get one mail order, I now had to keep the private dicks hat on and hunt down a copy of the LP. The LP, allegedly on Excrete Music comes out of Greece, I found a copy in Berlin (Tochnit Aleph) going for £15.
With Michael giving me his copy of the split tape and the LP coming through last week I am now collecting factor x releases. The tape is OK, 45 minutes of speeded up and slowed down guitar(s) through effects being the main theme, the LP is excellent.
Side One is guttural. The sound of factor x deep throating a microphone, as well as humming spliced with speeding tape rewinds and what sounds like an interview with Shaun himself. Side Two is more "musical" in a sense that instruments are being used, from synth drones and keyboard noodles to guitar plucks and radio interference. It all has a sense of being recorded live whereas Side One is studio based. Side Two reminds me of early Nurse With Wound.
The LP lasts 60 minutes.
A couple of days ago a member of The A Band told me he had been in touch with Shaun through Facebook. I've given him Steve's contact - hopefully Harbinger Sound'll put out that 12"ep.
Posted by Steve at 20:57