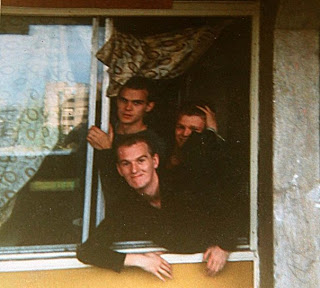 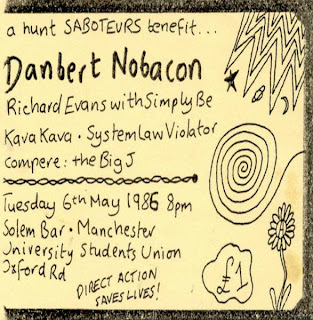 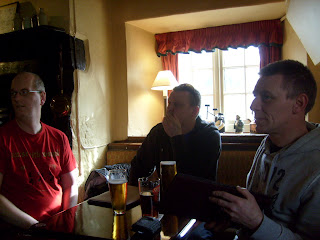 Just listening to a CDr given to me by Sean Rorke. The latest "beat less" recordings of Sevan_Oh. Sean records under the name of Sevan_Oh. He's still one half of Stray2, but his solo outings are as Sevan_Oh.
The CDr, compiled last month in his studio in Manchester, is fine work indeed. Layering of spoken word loops and "readings" to create an atmosphere of calm. chaos and uncertainty. I am reminded of three things here - the work of Column One, the Clock DVA track "The Discussion" that appeared on a Les Temps Modernes comp' LP in 1985 (I think) and the 23 Skidoo track "Just Like Everybody". But mainly Column One which is strange because I know Sean has never heard (of) them. Sevan_Oh has a MySpace site - but whether or not these tracks are up there or will end up there is up to you to find out!
Sean Rorke may be a new name to a few of you. In 1983 he helped start the project IBF before moving to Manchester and starting Carnifex Recordings and the project Sonic Death Hypnosis which morphed in to Systemlaw Violator in 1985. Systemlaw Violator were a favourite of mine too. A trip comprising of Sean on bass guitar/voice, his brother Greg on guitar and Andy Wright on drums/percussion. Their music - a freeform noise that today would put the likes of Borbetamagus (or whatever they're called) and John Zorn to shame - was way way way ahead of its' time. A sonic wall of strings set against erratic rhythmic beats with a vocal that nobody could comprehend. Systemlaw Violator were the first cassette release on Carnifex Recordings with the C60 "Mirabilia". With a translucent cover with a picture of a "sun face" and a sleeve made of metal - recycled Holsten Pils tins...."Mirabilia" was an instant classic. I was there at one of the sessions in William Kent Crescent, Hulme, Manchester when they were recording for the release. It was chaos as Brendan Sheridan and his 4 Track Fostex portastudio was trying to get a decent snare sound for the track "Knee Deep In The Shit Of It". Sean (as producer/musical director) was always the perfectionist. I think I left after two hours of hearing just snare drum. Brendan wasn't far behind.
Systemlaw Violator played two gigs. 1985 at The PSV in Hulme. I have a recording of this and it sounds like Soviet France. The second and final SLV gig was at The Solemn Bar in Manchester University in 1986. I was fortunate to be part of this gig line up on reel-to-reel tape machine loops. The gig was a benefit for the North West Hunt Sabs as well as supporting the "peace" camp that was set up outside Manchester Uni demonstrating against animal experimentation that was going on inside.....
Two of the acts on the bill demanded extra "soundcheck" time leaving SLV without one. The PA mixer said "It's all OK, I know what you want, a kind of Throbbing Gristle Cabaret Voltaire sound". Sean was furious and at one point refused to play - we were on stage in front of a modest sized audience at this point. I just played my reel-to-reel loops as the arguments and reconciliation ensued. Classic stuff, we ended up doing one song - "Primeage". After the gig Greg had had enough and that was the end of one of the greatest bands Manchester has ever produced.
In between forming Muhviertel Sean created N.T.R.A. A solo project. There was one cassette release on Carnifex Recordings called "From Force To Will" (A C45), but no live gigs.

Sevan_Oh is worth a listen, it really is good stuff, and when I can find the time I'll continue with the story of Muhviertel.